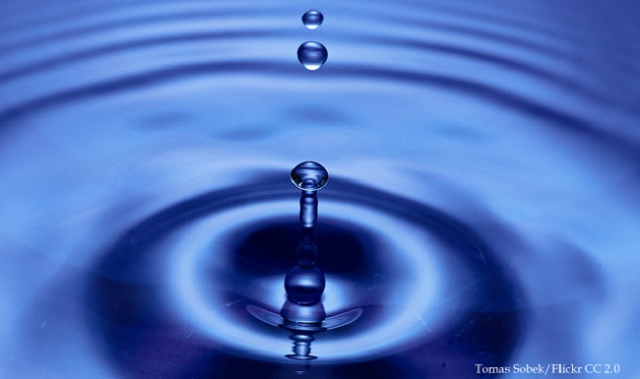 In 2006, the Nuclear Entergy Institute (NEI) proposed that nuclear facilities in the U.S. begin voluntary tritium monitoring in groundwater. This recommendation came after tritium, a radioactive isotope of hydrogen, was being found at high levels at several nuclear facilities throughout the U.S. Entergy began with 6 monitoring wells at Pilgrim in 2007. The Mass. Dept. of Public Health (DPH) officials have been provided with the results since the inception of the monitoring program. Tritium was detected in groundwater at Pilgrim as soon as the testing began in 2007. Leaks likely occurred well before this time but just were not monitored.

Due to rising levels of tritium in well #205 in 2010 (more than 25,000 picocuries per liter (pCi/L) was found in July 2010), DPH recommended that Entergy install even more wells and start testing surface water as well. By August 2010, 6 additional wells were installed. Over time (and due to additional detections of tritium on the Pilgrim site), Entergy has installed more monitoring wells bringing the total to 24. 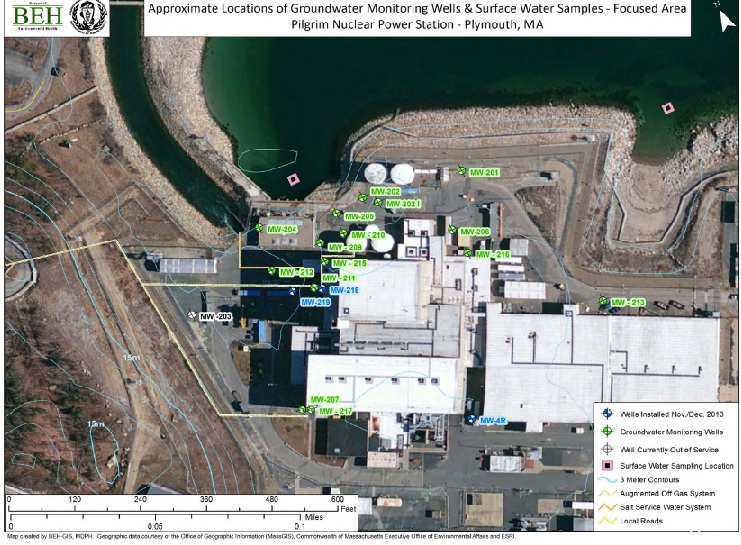 As mentioned above, tritium is a radioactive isotope of hydrogen that is produced during routine nuclear facility operations. Tritium is a carcinogen and a significant hazard when inhaled, ingested via food or water, or absorbed through the skin.

The National Academies of Science developed a report in 2005 called “Health Risks from Exposure to Low Levels of Ionizing Radiation,” which found that there is no safe level of exposure to radiation; even low doses can cause cancer. To address this, the U.S. Environmental Protection Agency (EPA) set a Maximum Contaminant Level Goal (MCLG) for all radionuclides (including tritium) as ZERO. EPA defines MCLG as the “level of a contaminant in drinking water below which there is no known or expected risk to health.”

Timeline of Tritium at Pilgrim Since 2013

In Apr. 2013, an underground line leading to the discharge canal (AKA “neutralization sump discharge line”) was suspected to have separated and began leaking tritium. The tritium leak was accidentally discovered when water was discovered coming out of an electrical junction box at the facility.

Five months later, in Sept. 2013, a report by DPH reported that tritium levels from one of Pilgrim’s groundwater sampling wells was trending higher than other wells on the site (4,882-5,307 picocuries per liter (pCi/L) of tritium was detected in monitoring well #216 in August). At that time, DPH reported that the leak could be related to the separated “neutralization sump discharge line” and more investigation would be needed.

DPH’s Oct. 2013 report showed the same problem. Well #216 was continuing to trend higher than the other wells (3,330 – 5,720 pCi/L). Additionally, tritium levels in wells #209 and #211 were also trending higher (797 – 1,350 pCi/L). Again, the separated “neutralization sump discharge line” was cited as a possible source. DPH’s Oct. 2013 report further discussed soil samples taken as part of the “neutralization sump discharge line investigation.” Preliminary results showed tritium present in the soil. The soil tests done by the Massachusetts Environmental Radiation Laboratory (MERL; MERL and Entergy split some of the water and soil samples for testing) also showed cobalt-60 and cesium-137 at levels above normal (MERL found 1,150 pCi/kg of cobalt-60 and 2,490 pCi/kg of cesium-137). These are extremely hazardous isotopes that release radiation. DPH stated that the presence of cobalt and cesium was reason for further investigation, particularly near well #216.

By Jan. 2014, nine months since the neutralizing sump pump discharge line was originally suspected to have separated and begun leaking tritium, the leak(s) continued. It was at this time that excessive levels of tritium (69,000-70,000 pCi/L) were detected in monitoring well #219. Well #219 is near catch basin #005, which collects radiologically contaminated water from Pilgrim’s “Neutralizing Sump Discharge Line” and sends it to the discharge canal and ultimately into Cape Cod Bay. Entergy and DPH continued their investigation and, all the while, high levels of hazardous pollutants continue to enter the groundwater and soils.

DPH’s most recent report (May 2014) discusses the two new wells that were installed as part of the Neutralization Sump Discharge Line Investigation in more detail (wells #218 and #219). Elevated tritium levels have been found in both well #218 and well #219 since they were established in late 2013. DPH reports that the elevated tritium levels detected in well #218 could also be attributed to the separation in the neutralization sump discharge line discovered in Apr. 2013. As for well #219, it is reported that this could be attributed to snow and rain runoff that is flushing tritium from soil around catch basin #10 (different explanation than the Jan. 2014 report). The soil may have been contaminated during permitted neutralization sump discharges that occurred through a temporary above ground line to catch basin #10 in Dec. 2013. The catch basin is now being further investigated.

Well #216 was also discussed – tritium in this well was first discussed by DPH in Sept. 2013. This well is located on the northeast corner of the turbine/reactor buildings. Entergy’s sampling results from Feb. 10th through March 31st ranged from 1,050 pCi/L to 2,890 pCi/L. Entergy is continuing to try to understand what the source of tritium in this location could be. Guesses include: the catch basins in the area that accept roof drain runoff; precipitation washing out tritium from the soil; water migration from inside the plant to groundwater via seismic gaps between reactor building and turbine building (seismic gaps are basically man-made spaces between building foundations that allow them to move during an earthquake); and historic spills.

DPH also reported on elevated tritium levels in well #2021 (1,688-1,740 pCi/L). Entergy reports that the high tritium levels in this well could be due to surface infiltration from melting snow piles nearby or could be the leading edge of a plume of tritium from areas up-gradient (i.e. the neutralization sump discharge line separation and catch basin #10). This is the closest well to the shoreline of Cape Cod Bay reported on so far – meaning if it is the leading edge of a tritium plume, the plume most certainly is entering Cape Cod Bay as well. DPH has requested that Entergy collect additional samples from MW202 and MW2021 (both very close to the shoreline) for further evaluation.

Preliminary results of soils tested in July 2013 were discussed in the Oct. 2013 report (see above). Final results of the soil testing were reported in this most recent DPH report – and the final results are even worse. High levels of tritium, manganese-54, cesium-137, and cobalt-60 were found at various depths near the separated neutralization sump discharge line. These were apparently “above typical background levels” in the soils near well #216. Once again, DPH only states that this warrants more investigation and soil sampling, as well as further characterization and/or remediation of the sources. More than a year after these dangerous pollutants were found in the soil and water on the site, all DPH continues to require of Entergy is “more investigation.”

It’s also reported that “Entergy is working with a consultant to finalize investigation plans.” So the plans to investigate are not even complete at this point – over a year after the initial discovery. Possible solutions are to replace the neutralization sump discharge line, investigate or clean catch basin #10, among a variety of other activities.

In its August 2014 report, MassDPH reports on environmental testing from mid-May to June 2014. Tritium levels in wells #218 and #219 were still trending higher at that time. Levels from 962 to 1,814 pCi/L were found in well #218 between March 2014 and June 2014. The high levels are suspected to be attributed to the neutralization sump discharge line separation. Tritium in well #219 reached levels as high as 17,158 pCi/L in May and 15,762 pCi/L in June, and MassDPH reports that the likely source is catch basin #10. MassDPH outlines several theories proposed by Energy for the higher levels in the area of catch basin #10, including paving that may have increased surface water runoff, which increased flushing of soil-based tritium into catch basin #10 and well #219.

MassDPH also report relatively high levels of tritium in Well #216. Results for the weeks of May 12th, May 19th, May 26th, and June 2nd were 1,170 pCi/L, 1,940 pCi/L, 2,630 pCi/L, and 1,680 pCi/L, respectively. Entergy’s investigation plans are discussed, including 1) evaluating the theory paving theory discussed above as part of an investigation of catch basin 10; 2) investigation and evaluation of the appendix R duct bank near the neutralization sump discharge line; 3) further characterization of subsurface soil contamination; 4) inspection, investigation, cleaning, and sealing of catch basins 10 and 11; 5) finalizing a plan to replace the neutralization discharge line; and more.

Nowhere in any of MassDPH’s reports does age-related degradation ever come up. Pilgrim has outlived it life-span and leaks will only increase at parts of the facility continue to degrade. Extreme temperatures, salt water and air, corrosive chemicals, and intense radiation have caused components and underground piping to thin and crack. Furthermore, state and federal agencies responsible for regulating Pilgrim have not indicated that Entergy will suffer any consequences whatsoever for the groundwater and soil pollution resulting from the leaks discussed above.