Yesterday, NMFS announced that the critical habitat areas were significantly expanded (including almost all of the Gulf of Maine and ALL of Cape Cod Bay) — though excluded some important migratory corridors along the east coast. Read more about it below in this article from our friends at Whale and Dolphin Conservation. See the original article from WDC →

WASHINGTON— In response to the efforts of conservation and wildlife protection groups, the National Marine Fisheries Service (NMFS) today protected 39,414 square miles of ocean as critical habitat for North Atlantic right whales. Only about 500 of the critically endangered whales exist today, and without additional protections the species faces a serious risk of extinction.

The Fisheries Service’s new rule protects crucial habitat for right whales, including the whale’s northeast feeding areas in the Gulf of Maine/Georges Bank region and their calving grounds from southern North Carolina to northern Florida. However, the rule does not protect the whales’ twice-yearly migratory routes through the mid-Atlantic. 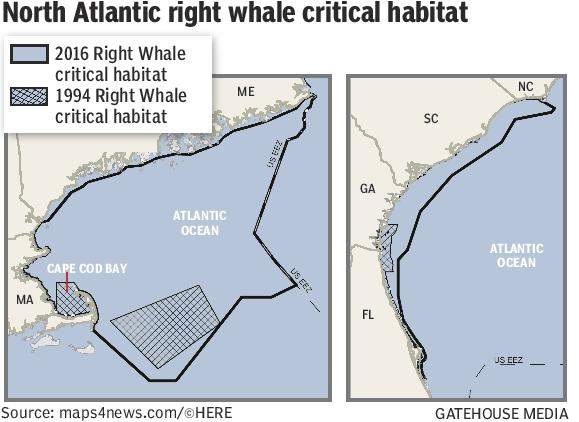 The new rule responds to a September 2009 petition filed by the Center for Biological Diversity, Defenders of Wildlife, The Humane Society of the United States, and Whale and Dolphin Conservation. The Fisheries Service’s action was compelled by a settlement agreement resolving litigation over the agency’s delay in responding to the petition.

“Right whales are at an extinction crossroads right now — entanglement in fishing gear, shipping and offshore oil drilling in the Atlantic pose serious risks to their survival. The new rule takes critical steps by protecting the whales’ northern feeding areas and southern calving grounds, but unfortunately it ignores the whales’ migratory route between the two areas,” said Sarah Uhlemann, a senior attorney at the Center for Biological Diversity.

For several years the Fisheries Service has acknowledged that expanding habitat protections is vital to reflect the most up-to-date information on the North Atlantic right whales’ seasonal habitat use and to help address longstanding threats to the species, including death and serious injury resulting from ship strikes and entanglement in fishing gear. Further, right whales increasingly face emerging threats from offshore energy development. Designating critical habitat under the Endangered Species Act requires the federal government to ensure adequate protected habitat so that human activities won’t degrade the value of the species’ environment or reduce the whales’ chances for recovery.

“This is great news for the North Atlantic right whale, though more still needs to be done,” said Defenders of Wildlife senior staff attorney Jane Davenport. “This species is under constant threat of serious injury or death from ship collisions and fishing gear entanglement. It desperately needs better habitat protections for foraging and calving areas to help ensure its eventual recovery and this final rule provides that. Right whales also use over 55,000 miles of marine habitat on the Atlantic Coast of the United States, but a mere fraction of those waters are protected. With fewer than 500 individuals left in the wild, every whale is vital to the species’ survival and recovery. This critical habitat expansion is an investment in the future of this unique whale.”

The conservation groups’ 2009 petition sought to expand critical habitat protections to all of the right whales’ nursery, breeding and feeding grounds along the East Coast and requested an increase in the whales’ protected area more than tenfold, to more than 50,000 square miles.

“We are thrilled that most of their feeding and calving habitats are finally being recognized as critical habitat. However, the notable absence of protections for the migratory corridor that connects these two habitats remains a concern,” said Regina Asmutis-Silvia, Whale and Dolphin Conservation Executive Director. “We should be safe when we commute between work and home, and right whales should be safe during their commute between their feeding and calving grounds.”

“We’re pleased to see that the Fisheries Service has responded to the broad public support for expanding protections for this iconic and critically endangered species. Right whales are more endangered than pandas, Siberian tigers, or black rhinos, and we applaud the Service for taking action,” said Sharon Young, field director for marine wildlife protection at The Humane Society of the United States.

North Atlantic right whales were devastated by commercial whaling in the 18th and 19th centuries. Despite being federally protected as an endangered species since 1970, the species has not recovered due to continuing threats.Right whales have very low reproductive rates — they do not reach reproductive maturity until age eight, and adult females only give birth to one calf every four years on average.

Read more about the the North Atlantic right whale and “the long and winding road” to increased protections? 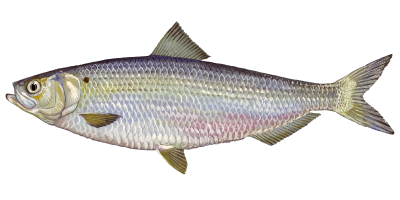