We share this media release from the Toxics Action Center (TAC) of Boston. One note: TAC tells us Entergy’s Pilgrim Nuclear Power Station has been named to the list three times since 2001. 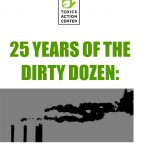 “The Dirty Dozen Award winners are dinosaurs. Their business practices are antiquated and becoming extinct. They could stave off extinction, but they would need to move forward in adopting many of the recommendations we outline in this report, including moving towards clean renewable energy and energy efficiency and phasing out persistent toxic chemicals.” said Sylvia Broude, Executive Director for Toxics Action Center.

To mark its 25th anniversary this year, Toxics Action Center released a report today called “25 Years of the Dirty Dozen: Past and Current Pollution Threats in New England”, profiling 12 sites and companies across New England, naming them “the most notorious pollution threats in the region” and proposing solutions to long-term pollution trends. “These Dirty Dozen awards spotlight repeat offenders who have still not cleaned up their messes along with several emergent threats, and generally highlight a wide array of toxic hazards ranging from leaking landfills to power plants, trash incinerators and hazardous waste sites. All of the sites pose a significant threat to public health and the environment and need immediate action by industry and/or government officials,” said Broude.

“Dominion’s Brayton Point Coal Plant is worthy of this award,” said David Dionne of the Coalition for Clean Air South Coast. “Not only is Brayton Point the biggest polluter for all of New England, but its failing business model and commitment to uneconomic and obsolete coal-burning is a liability for our health and our economy. Coal is on its way out and we need to help Somerset plan ahead for a transition beyond coal.” The report suggested that in spite of spending more than $1 billion in mandated environmental upgrades, Brayton Point continues to be a habitual polluter, responsible for nearly half of all mercury emissions in the Commonwealth in 2010, and self-reporting numerous air permit violations over the past several years.

Entergy’s Pilgrim Nuclear Power Plant was named another “winner” for Southeastern Massachusetts. Pilgrim Power Station’s waste and reactor contain 1,000 times the radiation levels of a Hiroshima-sized bomb. An attack on the plant could result in 100,000 deaths within a year of the accident.

“Pilgrim releases radiation daily into air and water and is built with the same flawed Mark I reactor design as Fukushima Daiichi,” said David Agnew from an active “Cape Downwinders” group and spokesperson for Pilgrim Coalition, an alliance of local groups across the South Shore and the Cape. “We need to heed the warning call of Fukushima and retire Pilgrim for good.”

Pine duBois from Jones River Watershed Association, a coalition partner, also spoke, saying that the watershed group has been pursuing state and federal regulators since February, and she recently joined a lawsuit against Entergy. “Pilgrim has violated the Clean Water Act more than 33,000 times since 1996,” said duBois. “Our ocean is not Entergy’s dump: Cape Cod Bay belongs to all of us, and our regulators should enforce the laws that prevent this kind of pollution.”

New Bedford’s Harbor Superfund Site and Parker Street Waste Dump were also recognized with a 2012 Dirty Dozen Award. In New Bedford, U.S. EPA recently reached a proposed $366 million settlement with AVX, the largest company responsible for PCB pollution in the New Bedford Harbor. South Coast groups are concerned that the settlement falls far short of funds needed for a full cleanup, and want to see a ‘reopener’ clause in the final settlement should the cleanup cost more than expected. “I’m worried the proposed settlement is only a drop in the bucket for the harbor cleanup,” said Edwin Rivera, President of Hands Across the River Coalition. “The EPA has consistently underestimated the cost of the cleanup: It is now seven times what they originally thought it would be, and we don’t want taxpayers to be left holding the bag when AVX leaves town.”

Furthermore, the Parker Street neighborhood continues to be riddled with widespread PCB contamination. Eddie Johnson, President of the community group, Citizens Leading Environmental Action Network (CLEAN), called on EPA and the City of New Bedford to authorize additional testing for dioxins and PCBs and take stronger action for cleanup. “We’ve known about the contamination for years,” said Johnson, “and so it’s inexcusable that in some neighborhoods, testing and cleanup have barely begun. The New Bedford High School and Keith Middle should never have been built on these sites, and now the City needs to support the strongest possible action to clean up their mess.”

The recommendations in the report, available at www.toxicsaction.org, fall into four main categories:

2.Moving Beyond Burning & Burying, Towards Zero Waste. A zero waste model offers a circular system of resource management in which discarded resources are looped back into the economy to be reused, reprocessed or composted. State administrators and waste management companies should retool their programs and operations to fit within a zero waste system

3.Ensuring a Safe, Renewable, Nuclear-Free and Coal-Free Future. Nuclear power and coal power is dirty, dangerous, and expensive. Existing coal and nuclear facilities should be decommissioned, not relicensed, and adequate resources should be provided by companies operating nuclear power plants and coal plants for decommissioning and site cleanup. Nuclear waste should be stored onsite in dry casks. New nuclear plants and coal plants should not be permitted or built. We must provide transitional support for workers and host municipalities and encourage clean, renewable energy development and energy efficiency.

4.Phasing Out the Persistent Toxic Chemicals. All chemicals on the market should be tested and approved from a precautionary viewpoint. We must ensure that unnecessary chemical use does not occur and that chemicals used do not harm human or environmental health.

The Dirty Dozen Awards were selected from a set of nominations by a thirteen-member panel of environmental and public health professionals. Other Massachusetts sites profiled in the report include Advanced Disposal’s South Hadley landfill and the General Electric PCB site in Pittsfield. Read more at www.toxicsaction.org.