After the season’s first significant snowfall this past Saturday, Massachusetts is now bracing for a major winter storm expected to arrive Monday night and last until early Wednesday.

The Weather Channel has named it Winter Storm Juno. The new tradition of naming winter storms and nor’easters was started by the Weather Channel and is different than the global tradition of naming hurricanes by the World Meteorological Organization. The storm has also been referred to as “historic” and “life-threatening.” However you want to refer to it, this is going to be one serious Nor’easter that will bring with it blizzard conditions – likely one of the worst nor’easters in fact, that our region has seen.

Light snowfall and easterly winds will start up mid-Monday. By late Monday and into Tuesday afternoon, the snowfall will become heavier and winds will increase – gusts could be as high as 70 mph. This will be a slow-moving storm and gale force winds could stick around until Wednesday morning – meaning 40-48 hours of east to northeasterly winds.

According to the NWS, a 3-4′ storm surge is expected and the worst of it will likely occur after midnight tonight to the end of the day on Wednesday. There are three high-tide cycles during this timeframe, according to NOAA’s tide table for Plymouth:

Clearly this is no ordinary storm – and it is raising extraordinary concerns related to the Pilgrim Nuclear Power Station. Read our past posts about the impacts of Hurricane Sandy in 2012, the February Blizzard of 2013, 2014 winter storm Hercules, and the January 2014 winter storm when simultaneous astronomical high tides converged, and their impacts on Pilgrim. And we must keep in mind that there are several nuclear facilities along the east coast in the path of this storm, all of which are cause for concern.

The Nuclear Regulatory Commission issued a press release today, stating that all facilities in the path of the storm are performing “multiple checks and preparations in advance” and ensuring that “doors designed to prevent flooding are ready to perform their task; fuel oil tanks for emergency generators are appropriately filled; and the site grounds do not have loose objects which could become airborne amid strong winds and cause damage.” However, none of these nuclear facilities have been powered down or taken offline as a preventive measure. And an operating nuclear plant in the path of a storm of this intensity is a real concern.

For example, take Pilgrim’s power-generating operations. Pilgrim requires offsite electricity to operate pumps that pull in seawater from Cape Cod Bay for cooling purposes. Pilgrim requires up to 510 million gallons of water each day to cool the reactor, spent fuel pool and to condense steam created in the electricity generation process. Without power to operate its pumps, Pilgrim is unable to cool their equipment, which could ultimately lead to a nuclear meltdown. When offsite power is lost, Pilgrim switches to back-up diesel generators (with reportedly 7 days’ worth of diesel fuel on-site). Just like what happened at the Fukushima nuclear disaster, we have concerns that Pilgrim’s backup generators could be taken out of service by an intense storm surge or flood.

Even if Pilgrim were to power down or to be taken offline, it still leaves concerns related to Pilgrim’s nuclear waste storage facility (also called dry cask storage). Pilgrim’s dry casks are located only about 175 feet away from the shoreline and about 6 feet above FEMA’s flood level. Due to the location of the casks, Pilgrim’s dry casks are vulnerable to storm impacts such as flooding and storm surge, as well as corrosion by the salt air and water. There are air vents at the bottom and the top of each cask to keep the nuclear waste inside cool. If one of these vents becomes blocked or clogged, then the nuclear waste could overheat and it could lead to a meltdown.

At a Plymouth Board of Selectmen meeting last year, an Entergy representative stated that if one of the vents became clogged for more than 24 hours, it could cause serious problems. We have also read reports that the vent could become clogged for up to 48 hours without issue. Regardless of whether it’s 24 or 48 hours, it is not a lot of time before a serious problem could occur.

In the diagram below, you can see how close to the ground the air intake vent is on the cask (circled in red). We are concerned that being less than 200 feet away from the shoreline, this vent could become blocked by a storm surge or a flood – or even by marine debris that is washed in by the storm – for more than 24-48 hours. Remember this storm will be very slow-moving and gale force northeasterly winds could stick around for 40-48 hours, with storm surge lasting even longer. 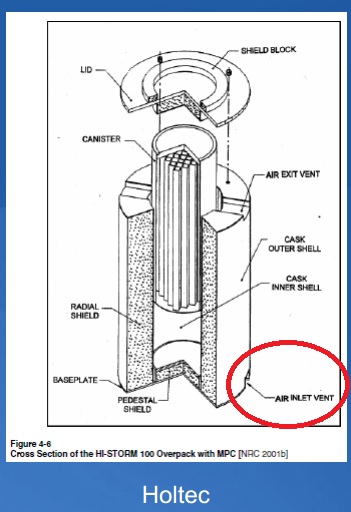 Holtec HI-STORM casks are being used at Pilgrim to store highly toxic nuclear waste. The vent at the bottom of the cask is a concern during intense storms – if blocked by surge or flood water, cooling of the nuclear waste inside can be hindered.

Heightening these concerns is the fact that Pilgrim’s first movement of nuclear waste from its spent fuel pool into dry casks was due to be completed by the end of this month (the first 3 casks). Take a look below at an aerial photograph from 2014 that shows Pilgrim’s first three casks (circled in yellow). These casks are in all likelihood already full of nuclear waste and sitting on the shoreline.

Pilgrim’s dry cask storage facility is circled in yellow. The 3 casks you see are due to be filled by the end of January 2015.

To address some of these concerns, we recently developed topographical maps of the Pilgrim site to help demonstrate the vulnerabilities to flooding and storm surge (see below for one of the maps). Our hope is that these maps will prove to regulators that there are real risks at the Pilgrim site associated with storm impacts and flooding – more risk than Pilgrim is reporting. We hope regulators will require Pilgrim to carry out a proper and accurate site survey and assessment of flooding risk – as well as take into account updated information about sea level rise, and influences by tides, storms, waves and wind. That way we will all have a true understanding of risks associated with Pilgrim’s operations and nuclear waste storage sites. 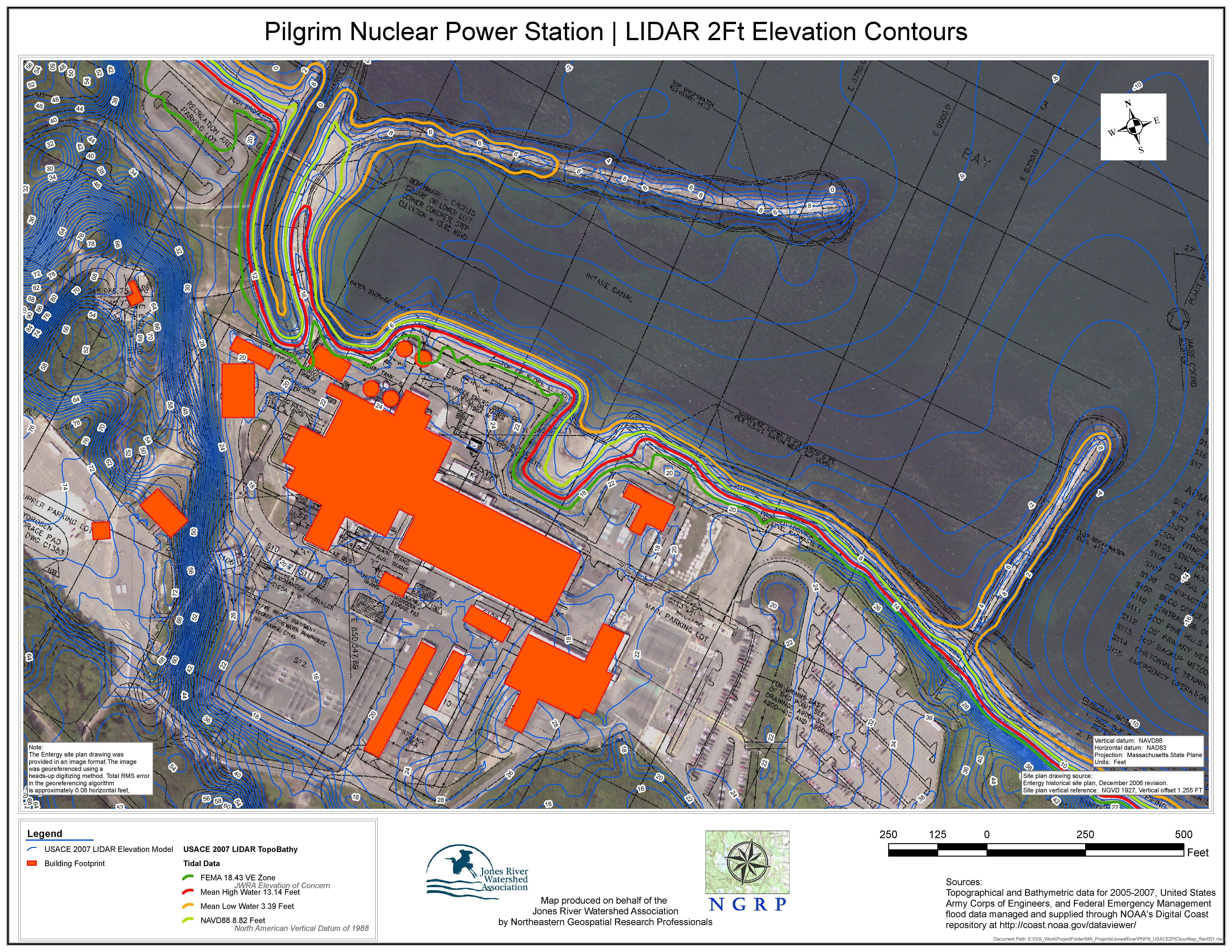 Topographical map of the Pilgrim site. Jan 2015. (click to view a larger image)

Jones River Watershed Association reached out to the NRC today and requested that their on-site inspector visually inspect the Pilgrim site during high-tide tonight during the storm. Read the request →

Photo at top of page: wikipedia