Massachusetts Department of Public Health (MassDPH) recently posted another 2015 groundwater monitoring report on its website. The October 2015 report describes the results of an on‐going investigation of levels of tritium in groundwater and surface water at Pilgrim Nuclear from the 2nd and 3rd quarters of 2015 (Apr. 2015-Aug. 2015). When the quarter 4 report (Sept. – Dec. 2015) will be available is unknown.

We have been tracking tritium leaks at Pilgrim for several years. Read a chronology and some additional background information about tritium and how testing began:

Energy collects water samples from 23 groundwater monitoring wells and two surface water locations. The samples are split between two labs – one lab contracted by Entergy and the other is the Massachusetts Environmental Radiation Lab (MERL). 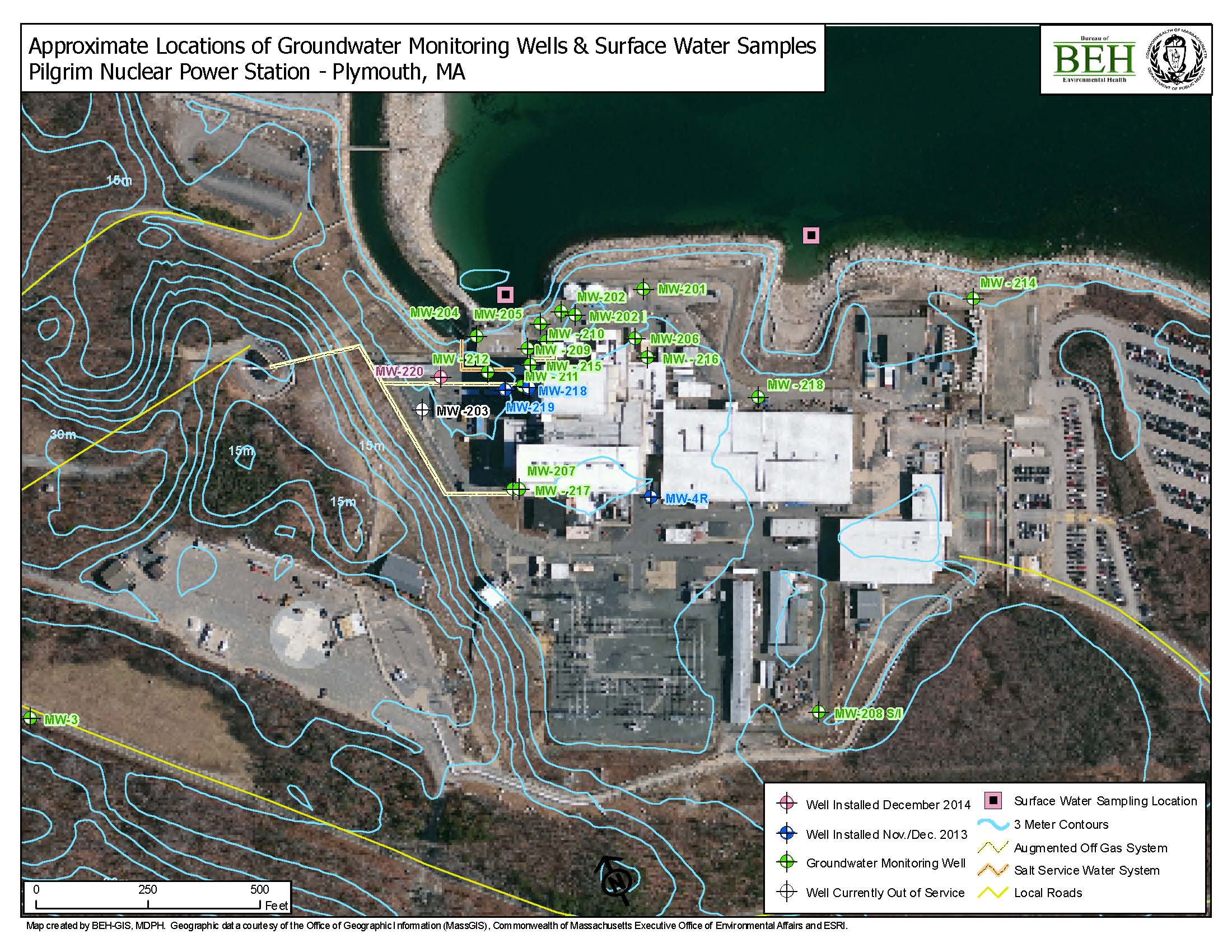 While reading MassDPH’s groundwater reports, it’s important to keep some numbers in mind for perspective:

Highlights from the October 2015 Report

Two of Pilgrim’s wells had levels of tritium above 3,000 pCi/L. Most wells had tritium levels from about 300 pCi/L to 1,000 pCi/L. No tritium was found in any of the surface water samples during this time frame. Wells #216 and #218 are discussed in detail since these are the 2 wells with tritium levels above the 3,000 reporting level.

Well #216 is described in the October report as having “cyclical fluctuations of tritium, with higher levels detected during October and early November of each year.” Since at least 2013 Entergy and MassDPH have been trying to figure out the source of the leak. While several guesses have been made over the years, in this most recent report Energy cites water migration from inside the plant to groundwater via a seismic gap (basically a man-made space in the building foundation that allows movement during an earthquake) as the cause.

While Entergy has reportedly resealed the gap, it is unclear if it has stopped the leak. The report does not list the specific levels of tritium found in the 4th quarter of 2015 (Sept.-Dec. 2015). The most recent results available are from quarter 3 (Jul. and Aug.) and range from about 1,500 to 3,600 piC/L. If higher levels are typically found in Oct. and Nov. of each year due to “cyclical fluctuations,” it will be interesting to see what the results are from quarter 4.

Well # 218 is also discussed. Tritium has fluctuated from about 960 pCi/L to 5,800 pCi/L since this well was installed 2013, and for quarters 2 and 3 of 2015 ranged from about 1,210 to 3,010 piC/L. The source of the leak(s) causing these elevated levels has largely been a mystery. Tests were done in fall 2015 to determine the cause, and it was determined that residual tritium in soil up‐gradient of the well that was contaminated during a break in the neutralization sump discharge line in 2013 could be the cause. In early 2014, excessive levels of tritium (69,000-70,000 pCi/L) were detected in nearby monitoring well #219 – nine months after a line break originally was suspected.

Read the quarter 2 summary of results →

Read the quarter 3 summary of results →

The Concerns and Implications for Decommissioning

All commercial nuclear facilities, including Pilgrim, routinely release radioactive materials to the environment in the form of liquids and gases, either planned or accidental. Many of the accidental releases come from underground piping and systems. These releases are a widespread problem and a serious concern for public and environmental health. Exposure to radiation increases the risk of damage to tissues, cells, and DNA and can cause genetic mutations, cancers, birth defects, and reproductive, immune and endocrine system disorders. These impacts can affect humans as well as ecological resources.

Another recent example of this chronic problem is what’s happening at Indian Point in Buchanan, NY. Earlier this month, Entergy, the company that runs Indian Point (and Pilgrim too), reported that water with alarming levels of radioactive tritium had leaked into the ground. According to Riverkeeper, “Alarming levels of radioactivity were reported at three Indian Point monitoring wells, including one where levels rose 65,000 percent from 12,300 picocuries per liter to over 8 million picocuries per liter.” Read the full press release from Riverkeeper →

At Pilgrim, the contamination of soils and groundwater raises questions and concerns in terms of decommissioning. Entergy has announced that Pilgrim will stop generating electricity no later than June 2019 (but probably sooner). The Nuclear Regulatory Commission (NRC) allows Entergy to choose a scenario for decommissioning and site cleanup. One option is long-term SAFSTOR, a process that would allow Entergy set aside Pilgrim for up to 60-years before decommissioning and cleanup is completed.

If the NRC allows Entergy to choose long-term SAFSTOR, groundwater and soil contamination might not be addressed for 60 years. Contamination currently migrates toward Cape Cod Bay and it will continue to do so, particularly as climate change causes sea level and ground water levels to rise, more intense storms, and more precipitation and flooding on the site.

We know tritium and other radionuclides are present in groundwater and soils at Pilgrim. It is clear that regulators and our elected officials need to ensure contamination is cleaned up – within a decade of closure as opposed to 60 years – in order to best protect public and environmental health.