Entergy’s Pilgrim Nuclear Power Station located on Cape Cod Bay in Plymouth, Massachusetts routinely impacts more than 90 species of fish – oftentimes overfished, prohibited and protected species. Nuclear facilities such as Pilgrim should be subject to the same regulation, oversight, fines, and penalties as the fishing industry and other entities.

Power plants’ cooling water intake structures take in massive volumes of water from natural water bodies to cool their equipment and discharge the heated waste water back to the source, impacting protected species and habitats. Pilgrim takes up to 510 million gallons of water from Cape Cod Bay every day and discharges the hot water back to the source creating a thermal plume that reaches nearly 5 miles into the bay.

The process also entrains small marine organisms (e.g., fish and shellfish eggs and larvae) through the system and impinges larger organisms on the intake screens (e.g., adult and young fish and invertebrates such as shellfish and squid). Pilgrim has impinged and entrained an annual average of 14.5 million fin fish and 160 billion blue mussels[1] (based on data from 1974-1999; See Table 4-4). Furthermore, work being carried out in Cape Cod Bay has demonstrated that the threatened Gulf of Maine Distinct Population Segment of Atlantic Sturgeon have been found in close proximity to Pilgrim.[2]

Check out this animation that shows how a once-through cooling system kills fish (animation by GRACE Communications Foundation). 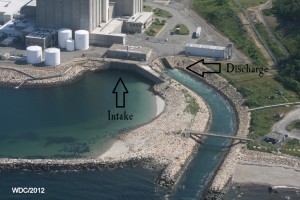 Up to 510 million gallons of water is pulled into Pilgrim’s cooling system (via the intake structure) and then the heated and polluted water is discharged back into Cape Cod Bay via the discharge canal. (click for larger image) 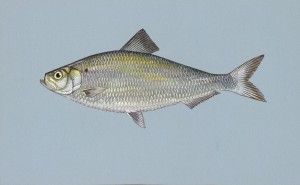 “River herring” is an umbrella term for alewife, Alosa pseudoharengus, and blueback herring, Alosa aestivalis. River herring play an important role in the culture, ecology and economies of coastal towns in our state. Both species are andromous meaning that they migrate upriver to spawn in the spring.

Unfortunately, river herring are in decline along the Atlantic coast primarily due to overfishing, predation and habitat loss. The construction of dams has also negatively impacted the species, since the damns block streams and rivers critical to their spawning migrations. Check out the work that Jones River Watershed Association has been doing to protect river herring, including dam removals and fish counts.

In May of 2012, The Atlantic States Marine Fisheries Commission (ASMFC) released the new River Herring Benchmark Stock Assessment. This comprehensive report concluded that the east-coastwide population is depleted to near historic lows. The full stock assessment report volume 1 and volume 2, as well as state specific stock summaries, can be found at www.asmfc.org.

As a result of declines in river herring abundance, the Massachusetts Division of Marine Fisheries established a three-year moratorium on the sale and harvest of river herring throughout the state in 2005. In 2008 the moratorium was extended through 2011 because of a lack of recovery of river herring in the Commonwealth. Since January 2012 the moratorium has been extended under the oversight of ASMFC. In addition, the National Marine Fisheries Service (NMFS) has listed blueback herring and alewife as “species of concern.”

Despite all the protections and recovery efforts, Pilgrim routinely kills river herring with its once-through cooling system (by impinging them on the intake screens, or “trash racks”) with no repercussions whatsoever. River herring is often one of the dominant groups impinged at Pilgrim. For example, in 2012 river herring was the top group impinged (24%: blueback 19% and alewife 5%), with about 2,218 fish taken throughout the year. Most were impinged in March 2012, with 64% of the bluebacks killed within about a 4-week period.

To learn more about river herring, this article River Herring: Illegal to Take…For Most of Us (April 2014; Written by Alex Mansfield, Jones River Watershed Association). 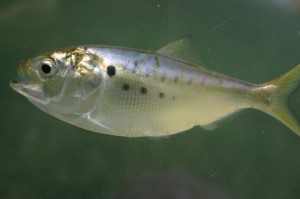 Menhaden is considered one of the most important fish in the sea. It’s an important food source for whales, dolphins, sharks, birds and commercially and recreationally important fish such as tuna, striped bass and cod. Menhaden are a critical part of the ocean food chain. However, due to overfishing there has been a 90% plunge in the menhaden population over the last 30 years. Although menhaden are not eaten by people, the fish are ground up and used in fertilizer and animal feed or used as fish-oil dietary supplements for people.

Despite concern about menhaden declines and the work being done to recover the population, Pilgrim takes large numbers of these fish every year – by impinging adults and young fish on the intake screens and entraining eggs and larvae through the system – without any regulations or penalties.

From 1980-2012, Atlantic menhaden were typically one of the most commonly impinged species on Pilgrim’s intake screens. Atlantic menhaden have also accounted for 43% of the “large impingement events” occurring at Pilgrim between 1973-2010, with takes ranging from 2,500 in one day to 107,000 in three days.[3]

In terms of entrainment, every year an average of nearly 57 million Atlantic menhaden eggs and larvae were entrained at Pilgrim from 1980-2009.[4]

To learn more about menhaden, watch this video by Pew Environmental Trust.

Rainbow smelt is a schooling fish common along the coast of Massachusetts. Smelt are anadromous species, maturing in marine waters then migrating to freshwater streams to spawn in the spring. Smelt are valuable to recreational fishing, small-scale commercial fisheries and as an important food source to other wildlife. They are commonly processed for animal feed but are also eaten by people. Concerns about health of smelt populations started in the 1980s. However, the status of smelt populations in Massachusetts is relatively unknown because few ongoing assessments are conducted on smelt fisheries or populations.

“Large impingement events” at Pilgrim are defined as those events involving more than 20 fish per hour and an overall event total of 1,000 fish or more. See below for a table of all large events documented at Pilgrim. 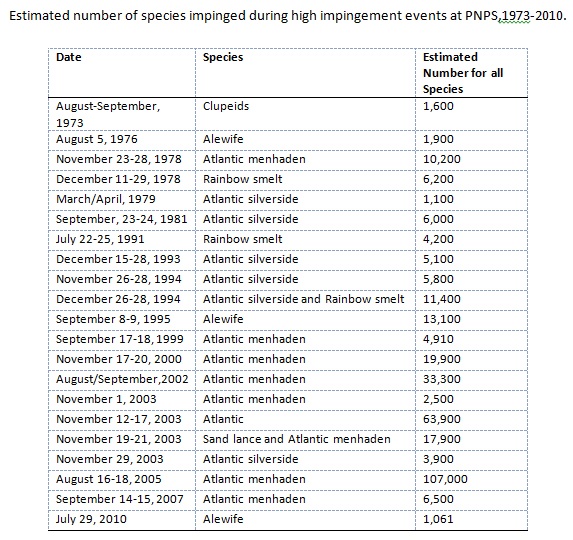 Even though invertebrates are not fish, we have added some information to this page since impingement and entrainment of invertebrates at Pilgrim is common.

Pilgrim kills several species of invertebrates on its intake screens (and through entrainment too, when eggs or larvae are pulled through the screens). For example, in 2012 11,931 total invertebrates representing 14 taxa were impinged by Pilgrim. Sevenspine bay shrimp (6,622), ribbon worms (2,010), longfin squid (1,141), lobster and four species of crab (1,809), horseshoe crab (99), starfish (70), and other invertebrates were impacted in 2012. Click here to see a table of all invertebrate species impinged at Pilgrim from 1980-2012.