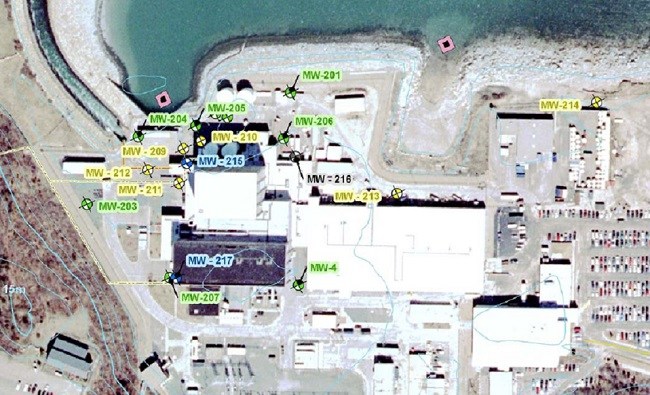 On January 15th, the public learned that excessive levels of tritium (a radioactive form of Hydrogen) were found in groundwater samples at Entergy’s Pilgrim Nuclear Power Station. In a Jan. 15th report to the Nuclear Regulatory Commission (NRC), Entergy stated that 69,000 pCi/L of tritium was detected in monitoring well #219. Pilgrim generates tritium in the course of its routine operations.

The U.S. Environmental Protection Agency (EPA) says that there should not be more than 20,000 pCi/L of tritium in drinking water, so Entergy’s contamination is more than 3x the EPA safe drinking water limit. However, it’s important to remember that EPA’s value for the maximum contaminant level goal is zero – meaning there is no threshold below which there is a zero risk. To learn more about tritium, see page 34 of the 2013 Pilgrim Watch Report.

Entergy’s monitoring well #219 – where the 69,000 pCi/L of tritium was detected – is near catch basin #005. The catch basin collects radiologically contaminated water from Pilgrim’s “Neutralizing Sump Discharge Line” and sends it to the discharge canal and into Cape Cod Bay. In Apr. 2013, Entergy reported a break on the Neutralizing Sump Discharge Line. It appears that the broken pipe caused radioactive materials to pollute the groundwater.

There are many unanswered questions about why it took almost nine months from discovery of the broken Neutralizing Sump Discharge Line in April to identify the contamination source in Dec. State and federal agencies responsible for regulating Pilgrim have not indicated that the plant’s owner, Entergy, will suffer consequences for the groundwater pollution. CCBW and its allies will continue to investigate the situation and will keep the public informed about developments. We will be calling on Entergy to be a better neighbor and provide the public with access to information about the nature and extent of the groundwater contamination at Pilgrim.

See past posts on this topic: