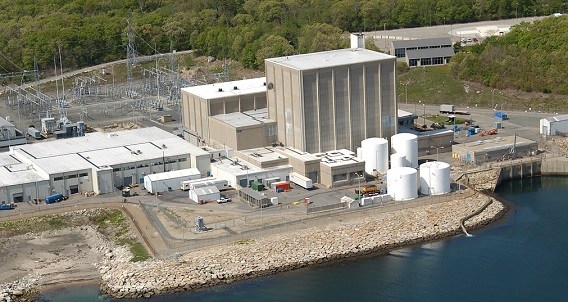 Over the past year, CCBW has highlighted several concerns related to the combination of climate change and nuclear power plants, particularly for facilities located in coastal locations such as Pilgrim. Rising sea levels, increasing frequency of storms and related storm surges threaten the cooling system that ultimately prevents nuclear meltdown. These issues could also have detrimental effects on dry cask storage facilities being built in close proximity to the coast, such as is happening at the Pilgrim site. Also, thermal pollution caused by Pilgrim’s cooling system, which uses and discharges up to 510 million gallons of water from the bay on a daily basis, only intensifies the effects of warming sea temperatures in the Bay, resulting in devastating effects on marine life and ecosystems.

Now, yet another threat is apparent. As an increasingly warming climate heats the water temperature of our oceans, the Bay’s water is becoming too warm for Pilgrim’s cooling system. Entergy’s operating license with the NRC requires the incoming Bay water that is used for cooling to be no hotter than 75 degrees F. During the July 2013 heatwave, the Bay temperature has been above 75 degrees F, requiring Pilgrim to shut down in order to comply with its NRC license. The Bay’s water is just too hot.

On Tuesday July 16th, an event report was filed to the NRC due to the lingering heat wave. Temperature remained above the 75 degrees F limit for approximately 1.5 hours. The plant was eventually required to reduce power to 85% after another event report was filed on Wednesday, July 17th when the water temperature remained above 75 degrees F for approximately 5.5 hours. Pilgrim was back to operating at 100% by July 18th. As the water temperature approached 75 degrees F again on the 18th, Pilgrim again powered down – as the temperature began to trend downward, Pilgrim again returned to full power.

This is happening in the wake of an “unusual event” declared at Pilgrim earlier in the week, for failure of alarms that warm of operational failures. The alarms, called annunciators, shut down for nearly 2 hours on July 16th for unknown reasons. Although the situation was called “serious” by a nuclear engineer, the facility continues to operate at 100% despite not knowing the cause of the failure. Not good news with water temperatures continuing to rise in the Bay.

In 2012, Dominion’s Millstone nuclear reactor in Connecticut had to shut down because its intake water was too hot – above 75 degrees F. Millstone gets its water from Long Island Sound. In May 2013, Millstone asked the NRC to increase the temperature limit for its intake water to 80 degrees F.

CCBW will oppose any effort by Entergy to seek a similar increase in the intake water temperature at Pilgrim. Such an increase would result in hotter water being dumped back in to Cape Cod Bay, causing more thermal pollution. Pilgrim has a Clean Water Act permit from the state and U.S. EPA that sets limits on the temperature of the water dumped back into the Bay from Pilgrim. If the incoming water is hotter, that means the discharge water will also be hotter. Dumping more hot water in to Cape Cod Bay, especially during a heat wave, would appear inconsistent with Entergy’s Clean Water Act permit.

Last year ranked 9th in the hottest years on record. The 2012 temperature records further prove a pattern of global warming, according to NOAA and NASA scientists. Rather than continuously allowing the nuclear industry to push the limits of safety and undermine environmental safeguards, industry regulators and our elected officials need to deal with the realities that climate change is already affecting the impacts that nuclear energy production is having on our oceans.