Climate change is a significant change in earth’s overall conditions, which can be measured by major changes in the distribution of weather patterns – such as temperature or precipitation, among other effects – that occur over several decades or longer. Climate change is mainly caused by global warming due to increasing concentrations of greenhouse gases in our atmosphere.

NASA, NOAA Data Show 2016 Warmest Year on Record Globally. Jan. 18. 2017 NASA Press Release. Global temperatures have continued to rise, making 2016 the hottest year on the historical record and the third consecutive record-breaking year, scientists say. Of the 17 hottest years ever recorded, 16 have now occurred since 2000. The trend is expected to continue. Also read the NY Times article about these findings →

Ambarish V. Karmalkar, Raymond S. Bradley. Consequences of Global Warming of 1.5 °C and 2 °C for Regional Temperature and Precipitation Changes in the Contiguous United States. PLOS ONE, 2017; 12 (1): e0168697. This study found that temperatures across the northeastern U.S. will increase much faster than the global average; the 2-degrees C warming target adopted in the recent Paris Agreement on climate change will be reached about 20 years earlier for this part of the U.S. compared to the world as a whole. Read a Boston Globe article about this study →

Valle-Levinson A, Dutton A, and Martin JB. Aug. 2017. Spatial and temporal variability of sea level rise hot spots over the eastern United States. Geophysical Research Letters. Sea-level rise is accelerating and some areas in the Southeastern U.S. are seeing “hot spots” where the ocean can rise 6x faster than average. Sea levels in the Southeast—between Cape Hatteras, N.C., and Miami—rose dramatically between 2011 and 2015 – a spike driven by a combination of natural factors (El Niño and the North Atlantic Oscillation) that is exacerbated by human-caused sea-level rise.
Study Abstract →
Scientific American Article →

Unprepared For The Rising Sea. WGBH, Commentary, The SCIF. Audio: Admiral Paul Zukunft, the commandant of the US Coast Guard, talks about the Coast Guard’s role in keeping America safe today, and our lack of preparation for the enormous emerging threats posed by a melting Arctic, rising sea levels, and more powerful storm systems.

Climate Central has released a suite of new maps, visuals and analyses fleshing out the implications of a new NOAA report that published updated sea level scenarios for the U.S. — including anew extreme scenario that would mean roughly 8 ft of global average sea level rise by 2100, but 10-12 ft along almost all U.S. shores. Scientists consider the scenario unlikely, but increasingly plausible, especially with continued high emissions of greenhouse gases (April 2017):

Goddard PB, Yin J, Griffies SM, & Zhang S. 2015. An extreme event of sea-level rise along the Northeast coast of North America in 2009–2010. Nature Communications. 6: 6346. This study found that sea levels along the Northeast U.S. rose nearly 3.9 inches in just a two year period (2009-2010) – a much more extreme rise than previous averages. The increase is attributed to a 30% slowdown in a major ocean current system and a fluctuation in atmospheric pressure at sea level.

Hansen J. et al. 2016. Ice melt, sea level rise and superstorms: evidence from paleoclimate data, climate modeling, and modern observations that 2 degrees C global warming could be dangerous. Atmos. Chem. Phys. 16: 3761–3812. There has been a general agreement around the world that limiting global warming to 2 degrees C would be tolerable. This study, however, finds that allowing a 2 degrees C warming level would lead to storms stronger than any we have seen in modern times, the loss of large parts of the polar ice sheets, and sea level rise that would impact major coastal cities before the end of the century.

DeConto RM & David P. 2016. Contribution of Antarctica to past and future sea-level rise . Nature. 531: 591-597. About three years ago, the United Nation’s climate science body had predicted up to 1 meter of global sea level rise in the next century, but it did not consider the contribution from Antarctica. According to this March 2016 study, collapsing Antarctic ice sheets are expected to double sea-level rise to two meters by 2100, if carbon emissions are not cut. Ecowatch recently published an article about the new findings.

Boston Research Advisory Group. Climate Projections Consensus Report: Climate change and sea level rise projections for Boston. June 1, 2016. Another 8 in. of relative sea level rise may happen by 2030, almost 3x faster than previously projected. By 2050, sea level may be as much as 1.5 ft. higher than in 2000, and as much as 3 ft. higher by 2070.

Potential effects of sea-level rise on the depth to saturated sediments of the Sagamore and Monomoy flow lenses on Cape Cod, Massachusetts. 2016. Scientific Investigations Report 2016-5058. USGS, APCC, Cape Cod Commission, & Mass. Environmental Trust. The water table on Cape Cod could rise by about 2 ft., on average, in response to a 6 ft. sea-level rise, the level some models predict will occur by 2100. This also creates potential for saltwater intrusion into aquifers.

Karegar MA, Dixon TH and Engelhart SE. 2016. Subsidence along the Atlantic Coast of North America: Insights from GPS and late Holocene relative sea level data. Geophysical Research Letters. 43(7): 3126-3133. Changes along the East Coast are causing land to sink along the seaboard, which is exacerbating the flood-inducing effects of sea level rise. Nearly the entire coast is affected, from Massachusetts to Florida and parts of Maine. This study also outlines a hot spot from DE to MD and into northern NC where problems associated with sea level rise have been — in some places — 3x as severe as elsewhere. Also read this Scientific American article about this study.

NOAA predicts an ‘above average’ Atlantic hurricane season, with 5 to 9 hurricanes expected (CNN.com. May 2017). Warm sea surface temperatures and a weak or non-existent El Niño will contribute to an above-normal hurricane season in the Atlantic in 2017, according to NOAA. Eleven to 17 named storms, 5-9 hurricanes and 2-4 major hurricanes are possible. 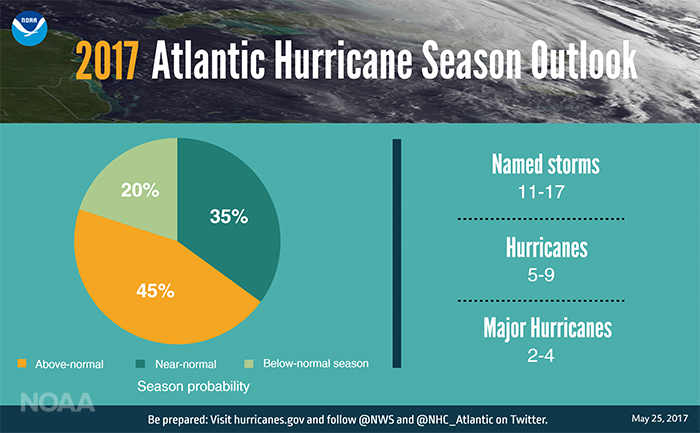 Donat MG. 2016. More extreme precipitation in the world’s dry and wet regions. Nature Climate Change. doi:10.1038/nclimate2941. According to this study, as global temperatures continue to rise, more “extreme rain“ events can be expected (meaning more flood risks) in both wet and dry regions of the world. The author stated in a March 2106 Huffington Post article that “It is probably a good idea to invest in infrastructure that helps in dealing with heavier precipitation, in particular if you are not yet used to those events.”

Boston Research Advisory Group. Climate Projections Consensus Report: Climate change and sea level rise projections for Boston. June 1, 2016. Increase in extreme precipitation is expected to continue. There are uncertainties
about how climate change will affect future storms. For tropical storms, there is some evidence that intensity has been increasing. If this continues, there could be more frequent major hurricanes (and associated flooding).

Turner AJ, et al. 2016. A large increase in U.S. methane emissions over the past decade inferred from satellite data and surface observations. Geophysical Research Letters. 43: doi:10.1002/2016GL067987. Researchers used satellite data and ground observations, and found that methane is leaking into the atmosphere in massive quantities in the U.S. Between 2002 and 2014, U.S. methane emissions increased by more than 30%, accounting for 30-60% of an enormous spike in methane found in the global atmosphere.

Report of the Massachusetts Coastal Erosion Commission. Dec. 2015. This report was released by the Massachusetts Coastal Erosion Commission last December, and provides eight overarching strategies that seek to: 1) Advance science, data, and information for better decision making; 2) Enhance the legal, regulatory, and policy framework; and 3) Enhance shoreline management practices and approaches, technical and financial assistance to communities, and outreach and communication efforts.

Here’s Why Wind Farms Are Hardly The Bird Slayers They’re Made Out to Be. Via ScienceAlert.com; June 20, 2017. Wind turbine blades do indeed kill birds and bats, but their contribution to total bird deaths is extremely low, as three studies (described in this article) show.

Have a suggestion for an interesting article or study that we don’t have listed? Email us and let us know!