Winter Storm “Mars”[1] began battering New England a little later than expected today, but as of about 8:00 AM the winds began to increase and snow began to fall. A blizzard warning is in effect for southeastern Mass. and the Cape and Islands until tonight.

According to the National Weather Service, a blizzard warning is issued when sustained winds or frequent wind gusts 35 mph or more and considerable falling and/or blowing snow occurs, visibility is frequently reduced to less than ¼ mile, and these conditions last for three hours or longer.

This storm is bringing heavy snowfall (up to 18” possible in some areas, including Plymouth) and very strong winds – a combination that could result in large snow drifts, low visibility, power outages, and coastal flooding. As of late Monday morning, steady winds of 45 mph and gusts up to 65 mph are expected. While the snow is grabbing the headlines, it is the near hurricane-force wind gusts impacting coastal Plymouth County and the Cape and Islands that could cause the most damage. 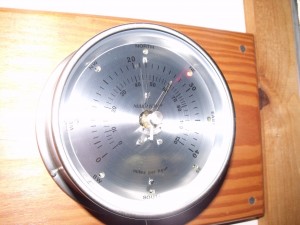 There are two high tides today, but the most concern about coastal flooding will be during the late morning high tide (about 11:00 AM; >11 feet). Flooding will still be a concern during tonight’s high tide but not as much as this morning. Some areas will be inundated to 2-3 feet. 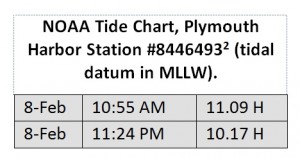 Eastern facing shorelines and the Cape and Islands are at the most risk due to coastal flooding and wave action. The seas are projected to reach up to 20 feet in Mass. Bay and 20-25 feet east of Cape Cod and Nantucket. Storm surge is expected to be about 2.5-3.0 feet in southeastern Mass. Large waves – larger than 20 feet – are expected offshore, which will cause more wave runup and impact to seawalls and other structures along the coast. The greatest coastal impacts will occur along coastal Plymouth, Cape Cod and the Islands.

Remember that Pilgrim Nuclear is located only about 15 feet above mean sea level, facing northeast on the Plymouth coastline. After Winter Storm “Juno” last year (and other storm related problems), Entergy enhanced its storm procedures and is also supposed to be making improvements to Pilgrim’s switchyard to prevent power outages during storms like today’s. As an interim fix, Entergy’s storm procedures now require Pilgrim to shutdown preemptively, before a severe winter storm hits. This was the case with Winter Storm “Mars”– Pilgrim shut down preemptively last night, beginning around 9:00 PM. We now know that Entergy ultimately makes the decision to preemptively shutdown the plant before a storm; however, there is also an agreement between the NRC and Entergy that these shutdowns will occur. Criteria for Pilgrim’s preemptive shutdowns include wind speed and direction, including gusts exceeding 50 mph.

In the past, concerned citizens and local groups (including us – see here for an example ) often requested that Pilgrim shut down before storms – we are relieved to see that Energy is finally implementing this preemptive procedure to enhance safety at the plant. 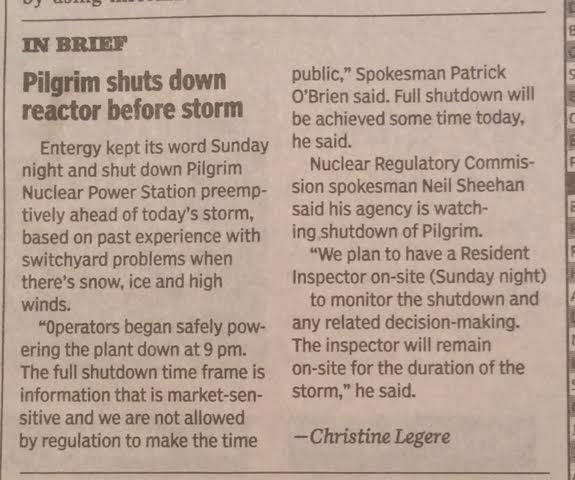 We continue to strongly believe Pilgrim’s coastal location makes it inherently unsafe – and concerns will carry on even after Pilgrim shuts down permanently. Remember, Pilgrim’s nuclear waste storage areas are located very close to the shoreline, and at low elevations – creating concerns over potential accidents, leaks and contamination of Cape Cod Bay. Coastal hazards will also increase challenges for proper site cleanup during the decommissioning process, once that begins.

Preemptive or permanent shutdowns will not make these problems go away. Pilgrim’s nuclear waste will be stored on site for potentially hundreds of years (or longer) and Pilgrim could be allowed, under NRC rules, to defer cleanup for up to 60 years post shutdown. As climate-change related issues get worse, so will the problems associated with these issues. 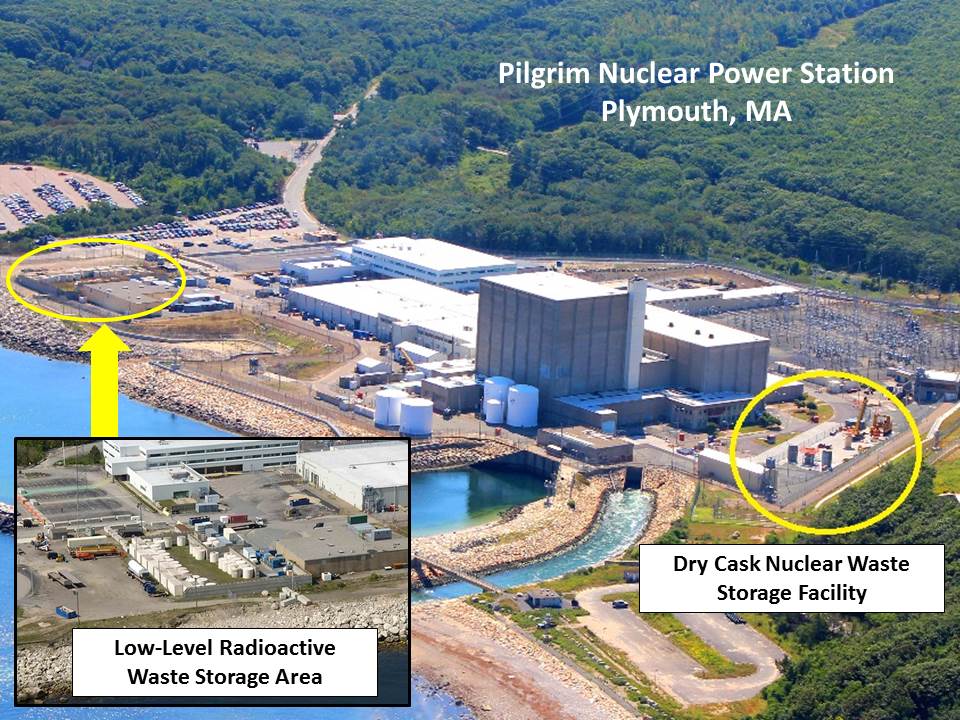 In late December we released the Coastal Risk Consulting report, Analysis of AREVA Flood Hazard Re-Evaluation Report for Pilgrim Nuclear Power Station, which underlines the fact that Entergy is underestimating flooding risks at Pilgrim for a variety of reasons. Learn more →

Northeastern Geospatial Research Professionals also recently updated Pilgrim site maps (Feb. 2016). These maps confirm elevation inaccuracies in Entergy’s site plans for Pilgrim’s infrastructure and the nuclear waste storage areas. This shows that there is more accurate elevation information that the NRC should consider when determining flood risks at Pilgrim, and that Entergy’s claims that Pilgrim is safe from flood impacts is based on some inaccurate information.

We know that Pilgrim is vulnerable to flooding and other coastal-impacts, especially during storms like “Mars.” Preemptive shutdowns are a good first step, but it’s imperative that the NRC requires Pilgrim’s nuclear waste areas to be moved farther from Cape Cod Bay and to higher elevations. It’s also important that once decommissioning begins in the near future, that cleanup of the site is done quickly so ensure that flooding, sea level and groundwater rise, and storm impacts don’t flush contaminants present in the groundwater and soils at Pilgrim’s site into Cape Cod Bay and the surrounding environment.

Storms like the one today are a further reminder that Pilgrim needs to move aggressively toward immediate cleanup post shutdown, and that Pilgrim’s nuclear waste is precariously positioned seaside.

It is useful to note that 38 years ago today the Blizzard of ’78 breached the jetties at Pilgrim—perhaps this is the reminder we need.

The winter is not over yet, and we are sure to see more storms like “Mars.” Every storm is a reminder of Pilgrim’s vulnerability and should raise red flags for regulators responsible for the safety of people and the environment in the region.

[2] Tidal elevations from the Plymouth Harbor Station are referenced to “Mean Low Low Water” and are not equivalent to the same elevations on land. But when you add a foot or more of surge, and understand that waves can be 6 to 15 or so feet high on top of the surge in this type of storm—then we can understand how vulnerable Pilgrim and other properties along the coast can be. Learn more about Tidal Datums →