A brutal winter storm is bearing down on New England, and the Massachusetts coast will be affected beginning Tuesday morning. Storms like this one, particularly when they include northeast winds, raise serious concerns about Pilgrim Nuclear Power Station. Pilgrim faces northeast directly on the Cape Cod Bay coastline, vulnerable to storm impacts.

High winds, flooding, and power outages have caused major problems for Pilgrim’s operations, and can do so again. Past examples:

Physical damage and loss of offsite power can interrupt equipment that cools the nuclear reactor and prevents meltdown. Pilgrim must rely on back-up diesel generators for cooling when power is lost, but flooding also raises risks to the backup generators.

Pilgrim has a policy now to shut down preemptively before storms that bring 50+ mph winds to reduce risk associated with manual “scramming” — or when plant workers have to shut down the reactor quickly and unexpectedly. We hope Pilgrim follows this policy and powers down before tomorrow’s storm.

Pilgrim’s dry cask nuclear waste storage area is also at risk from storms. The storage area is only about 150 feet away from the shoreline, vulnerable to storm surge, flooding, salt water degradation, and other impacts. This raises serious concern about potential accidents and leaks into Cape Cod Bay. The Nuclear Regulatory Commission (NRC) does not appear to be concerned about these risks to Pilgrim’s casks—but we are.

According to NOAA, as of 2:00 PM today, tomorrow’s storm is expected to bring snow rates of 2-4 inches/hour and 40-50 mph winds or more. This will likely bring near blizzard conditions. There is a Coastal Flood Warning in effect from 11am to 3pm; a Winter Storm Warning in effect from 5am to 3pm; and a High Wind Warning in effect from 8am to 6pm. The flood warning includes Plymouth and a storm surge of about 3 feet is likely Tuesday afternoon within a few hours on both sides of the mid-day high tide. High tide is expected around 1:30pm at about 10.4 feet. Moderate to major coastal flooding is also expected, with overwash from large waves. This wave action increases the reach of floodwater and surge. Moderate to severe coastal erosion is also expected. 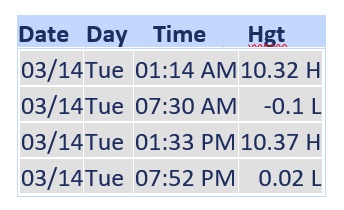 While believe Pilgrim should shut down prior to the storm, and the NRC should be closely monitoring conditions on the Pilgrim site tomorrow and provide public photos and/or video of the impacts.

We currently have an outstanding petition to the NRC concerning flooding evaluations on the Pilgrim site. The petition, submitted in June 2015 by the Union of Concerned Scientists, Jones River Watershed Association, Beyond Nuclear, Cape Downwinders, NIRS, Pilgrim Watch, and others, asks the NRC to take enforcement action and require that the current licensing basis for Pilgrim include flooding caused by intense precipitation events. The basis for the petition was an evaluation by Entergy, Pilgrim’s owner, which admits the Pilgrim site could become inundated with floodwater due to intense precipitation events — nearly ten feet higher than what the facility was originally licensed for. Learn more about this petition →

Weather and storm conditions along our coastline will continue to get worse over time. More robust planning and actions from the NRC and Entergy to protect people and the environment are sorely needed, not just for operations, but for decommissioning and storage of nuclear waste for decades to come. This storm will undoubtedly underline these concerns.