What is Wart, the Right Whale, Telling Us?

Wart, an endangered North Atlantic right whale, was discovered in Plymouth Harbor in Cape Cod Bay on January 12, 2013, with her newborn calf. It has been 27 years since a right whale mother and calf have been sighted in Cape Cod Bay in January.

There are fewer than 500 North Atlantic right whales on Earth. Part of Cape Cod Bay is the whale’s “critical habitat” under the federal Endangered Species Act. Wart’s birthing of a calf was probably only the second time this happened in the waters off the Northeast coast. On January 14, 2012, Wart swam very close to Entergy’s Pilgrim nuclear power station in Plymouth.

Local groups have asked the federal National Marine Fisheries Service to conduct a thorough assessment of Pilgrim’s impact on endangered species such as right whales (see: June 2012 Request). Under the federal Endangered Species Act, dumping heated, polluted water on right whales could be illegal. If right whales were subjected to Pilgrim’s thermal pollution, Entergy could be liable for a $25,000 civil penalty or $50,000 criminal fine for each violation.

Is Wart warning us about nuclear safety?

Wart and her calf were unofficially reported within 100 yards of Pilgrim – inside the 500 yard “exclusion zone.” The zone was established after 9/11 to try to prevent a hostile attack on the reactor, which could explode the nuclear waste stored there. There is more radioactive Cesium 137 stored at Pilgrim than was ever released by every nuclear bomb ever exploded in the atmosphere. An explosion at Pilgrim would have unimaginable consequences. “Emergency preparedness” in the event of a nuclear accident at Pilgrim is a hot topic in the region. Maybe Wart wants to know, “what’s the emergency plan for me and my calf?” 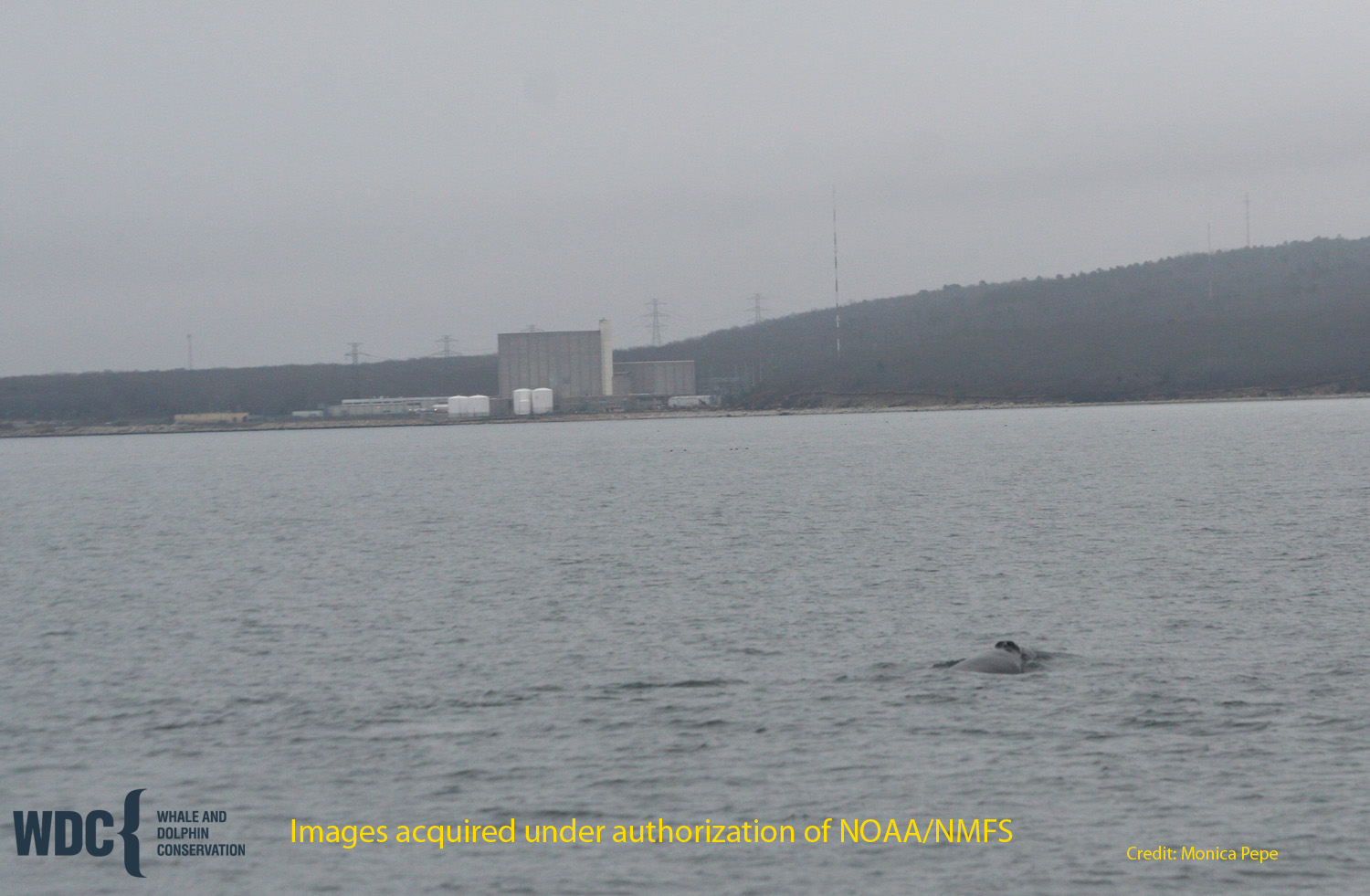 Is Wart’s message about climate change?

On Inauguration Day, January 21, 2013, Wart was spotted from the shoreline at Pilgrim (this was an unofficial report). The President’s Inaugural Address that day gave climate change center stage. Was Wart here to reinforce the President’s remarks about the need to respond to the threat of climate change?

Climate change and ocean warming presents risks to right whales in at least two ways. First, right whales usually give birth in warmer waters off Florida and Georgia. The oceans may be warming up so much that Wart’s instincts are telling her Cape Cod Bay could be a suitable calving ground – and that Florida and Georgia are too hot. According to Regina Asmutis-Silva, Senior Biologist at Whale and Dolphin Conservation, the “water temperature here is a lot warmer than we would expect this time of year. And it’s probably closer to April” temperatures.

Second, climate change may be affecting Wart’s ability to get adequate food while in Cape Cod Bay. Wart needs a specific species of plankton – copepods. This plankton is a cold-water species. According to Regina Asmutis-Silva, if the water temperature in the Bay is warm enough for the whales to calf, that could mean it is not cold enough for copepods.

World-renown right whale expert Dr. Charles “Stormy” Mayo from the Provincetown Center for Coastal Studies echoes concerns about climate change. “The Cape Cod Bay habitat appears to be changing dramatically and there is some question as to whether the habitat change is in response to changes in condition along the entire east coast. There is a real question as to whether this changing environment will be nurturing to mother and calves.” Read Dr. Mayo’s comments to NMFS here: PCCS 4-13-2012 →

Is Wart telling us she needs more living space?

In 2009, conservation groups asked the federal government to expand the right whale critical habitat into the Western part of the Bay, near Plymouth. Read the petition here: Critical Habitat Petition →

In 2010, the government provided a notice as required by law, but has not decided on the conservation group petition yet. See the NMFS Notice. Maybe Wart was asking for a more room to nurse her calf.

Is Wart telling us to clean up our act?

Since 1972, Pilgrim has been using Cape Cod Bay as a dump for polluted cooling water. Pilgrim takes in almost one half billion gallons a day of water out of Cape Cod Bay, sucking in and killing fish, plankton, and small marine life. Since 1972, Pilgrim has sucked in an amount of water equal to the entire volume of Cape Cod Bay. That water is discharged back into the Bay up to 32 degrees hotter every day Pilgrim operates. Sometimes Entergy dumps water heated as high as 120 degrees. According to Entergy’s own report, the thermal pollution zone caused by Pilgrim covers nearly five square miles of Cape Cod Bay (see page 5-46 of Pilgrim Demonstration Report (2000). According to the National Marine Fisheries Service, this nearly five square mile area extends out about 1.3 miles into the Bay (see page 3 in the May 2012 NMFS Letter). Entergy is allowed to operate its cooling water system under a Clean Water Act permit that is 17 years old. This permit was last reviewed for it’s environmental impacts in 1991.

Groups throughout the region are responding to Wart’s concerns in three ways:

Wart’s appearance in Plymouth, America’s hometown, is auspicious. Plymouth is confronted with the legacy of nuclear power that presents an unacceptable health and safety risk, and pollutes the Bay.

It’s time to listen to Wart.

Ms. Sheehan has been a public interest lawyer since graduating from Boston College Law School in 1983. She is a Plymouth native and works on forest protection, land conservation, closing down Pilgrim, and a wide range of environmental, social justice, and conservation matters.