Seventy-three year old Paul Rifkin of Mashpee, Mass. was on trial February 2 at Plymouth District Court. The charge was trespassing at Entergy’s Pilgrim Nuclear Power Station on Mother’s Day in 2015 during a rally with 40 other protestors. Two people were arrested, and it was Rifkin’s third arrest at Pilgrim.

Rifkin refused to plead guilty or accept a deal with the prosecution because his actions last May, he stated, “deserved commendation, not condemnation.” He chose to have a jury trial with the possibility of jail time.

A jury of six was selected and Rifkin represented himself. Rifkin presented his case by highlighting the difference between trespassing and civil disobedience. He also brought up the concept of the “necessity defense,” where an emergency situation compels a person to act, potentially in conflict with convention and law, to avoid greater harm from occurring. Read his full testimony →

In his opening statement, Rifkin said, “I went there attempting to raise public awareness about the fact that the facility was and is an imminent danger to where I live, to Cape Cod, and indeed to all of southeastern Massachusetts…The possibility of grievous harm was and is so clear to me that I was willing to take the risk of being arrested.”

According to Massachusetts emergency plans, in the event of a disastrous situation at Pilgrim, bridges leading off of Cape Cod would be closed and residents will be told to shelter in place, trapped until others living closer to the plant are evacuated.

The jury found Rifkin guilty of misdemeanor trespass. The Assistant District Attorney suggested 10 days jail time, a fine, and an order to stay away from Pilgrim. Rifkin was allowed to weigh in on his penalty, and the Judge finalized his sentence to 24-hours of community service and six months of probation.

The Judge went on to say that he felt that demonstrations against Pilgrim needed to continue, since his son lived in Falmouth and he understood that there could be “no escape from the Cape” if a nuclear accident were to occur. However, Judge Sullivan made a point to underline the difference between “demonstrating” and “trespassing,” and suggested jail time was a real possibility the next time around.

In response Rifkin stated, “I’m getting too old for this stuff and hope younger people will take up the gauntlet as 2019 is too long to wait to close the monstrosity of Pilgrim.”

After the sentencing Rifkin suggested “I want to come back there and hug you” to the Judge. Rifkin exited without his hug, but not without a big smile. 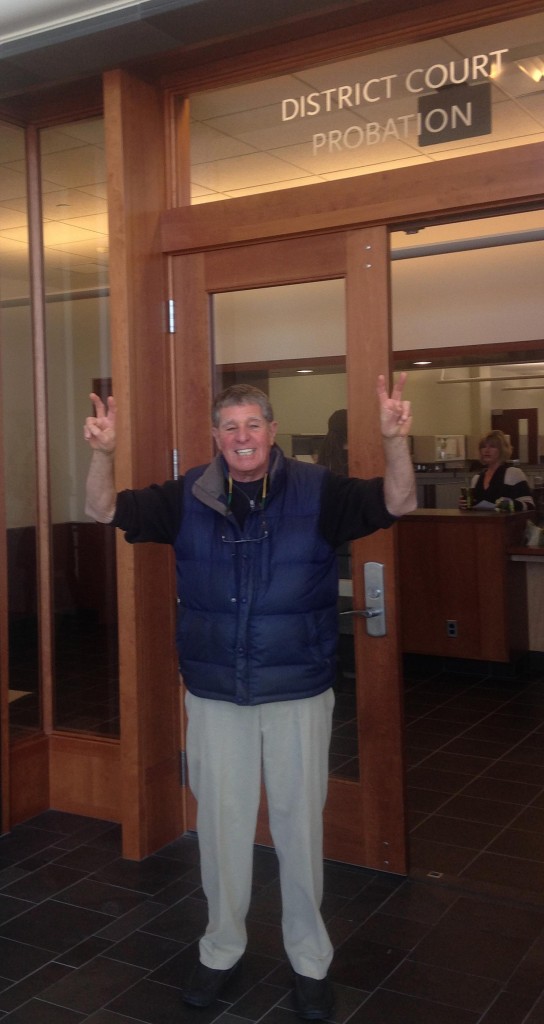