In a decision issued Feb. 5, 2016, a state administrative law judge upheld the Chapter 91 Waterways License issued to Entergy by the Massachusetts Department of Environmental Protection (MassDEP). The Decision also granted the local group Jones River Watershed Association (JRWA) and twelve residents the legal right to bring the appeal, but said that MassDEP properly applied the law in granting the License.

This Waterways License allows Entergy to put moorings in Cape Cod Bay and to use them for an emergency cooling water system at Pilgrim Nuclear Power Station (Pilgrim). In 2012, one year after the Fukushima nuclear disaster in Japan, the U.S. Nuclear Regulatory Commission (NRC) ordered Entergy to install upgrades at Pilgrim to prevent a similar disaster at Pilgrim.

One of the fixes that the NRC ordered is a backup emergency water system. Even when it it’s not operating, Pilgrim needs water to cool the nuclear reactor and spent fuel pool where the nuclear waste is stored. Pilgrim also needs offsite power in order to run pumps that cool the pool and reactor. Since 1974, Pilgrim has regularly lost power during storms, requiring it to use its emergency backup generators. The NRC found that if there was a severe natural event like a nor’easter, blizzard, hurricane, earthquake or tsunami that knocked out the generator and offsite power, Pilgrim could have a meltdown or spent fuel fire. Hence the need for a backup cooling system.

Entergy’s proposal to the NRC, dubbed the “Recipe for Disaster” and the “Fukushima Fix” by critics, is to install moorings in Cape Cod Bay so that during an event like a hurricane, it could send workers on to the beach (at the mean high water mark) to attach strainers to the moorings and then connect a hose. Then Entergy would pump water into the reactor this way. 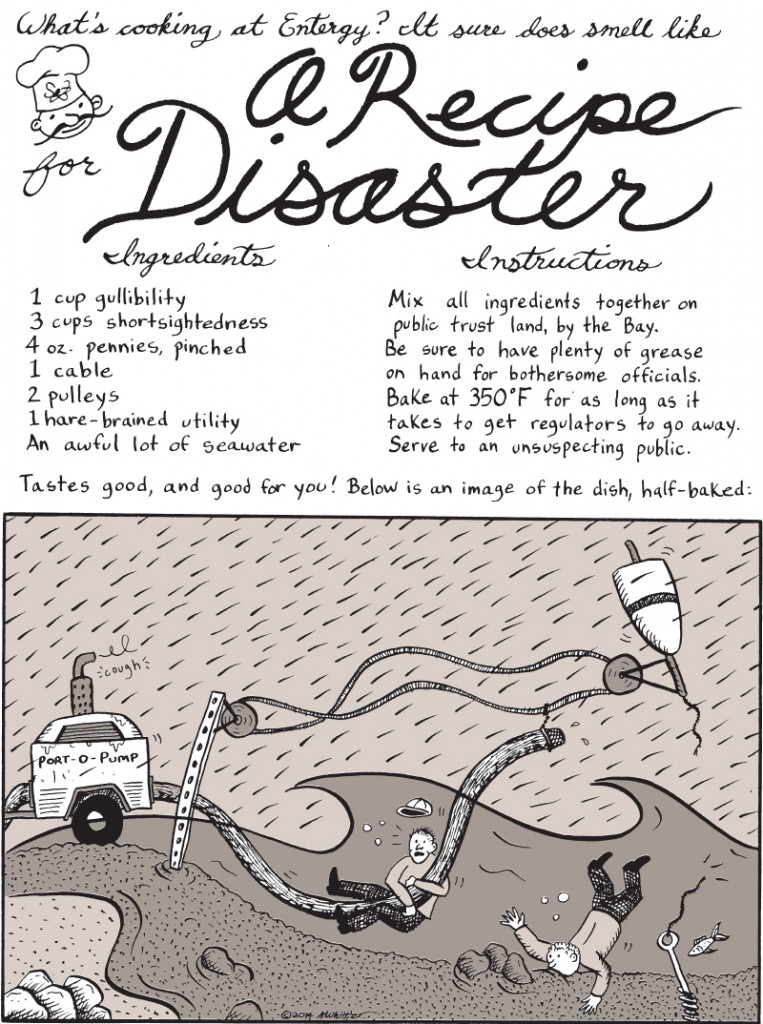 Entergy needed a state Waterways License to put the moorings in the Bay for the backup system. Under state law, the shoreline of Massachusetts belongs to the public and is held in trust for the people. Landowners on the shore own to the low water mark, but if they want to put a mooring in that area, they have to get a license. The public has the right to “fish, fowl and navigate” in the intertidal area. When Entergy applied to MassDEP for the license to put a mooring in Cape Cod Bay, it told MassDEP that the moorings would be in “private tidelands” and not harm public rights in the intertidal area.

In the summer of 2014, many local residents and the Jones River Watershed Association (JRWA) submitted comments to MassDEP challenging Entergy’s license application. MassDEP held a public hearing in Plymouth in November 2014, attended by about 100 people. A few months later MassDEP issued the Waterways License despite the objections raised by the public. Twelve local residents and JRWA filed a legal appeal in March 2015.

MassDEP’s judge held a hearing on September 24, 2015 and heard evidence from JRWA, the residents, Entergy and MassDEP staff. The judge’s February 5 decision upheld the License.

The decision has two parts: first, the judge ruled that JRWA and the residents had legal standing to bring the appeal challenging the Waterways License. This is a significant victory for the rights of citizens to challenge actions by the state that may harm the environment. Entergy argued that the appeal should be thrown out since JRWA did not meet the legal standing and it could not show that it would suffer “harm” from the project. The judge disagreed.

He wrote that if the proposed mooring system fails to work in an emergency at Pilgrim, “this may result in inadequate cooling of the radioactive [spent fuel pool] at Pilgrim and lead to a [spent fuel pool] fire, and if that occurs, dire environmental consequences would likely befall the Jones River and Cape Cod Bay.”

The judge described the various ways that this harm would occur: “the quality, habitat and ecosystem of that area would be harmed by radioactive contamination resulting from the spent fuel fire, and as a result, JRWA and its members would suffer harm to their conservational, recreational, and aesthetic interests in the area because their ability to use and enjoy the Jones River, its estuary, and the functioning of Cape Cod Bay as a habitat, nursery, and migratory route for fish and marine species connected with the Jones River would be impaired.”

The judge based this finding on testimony from Pine duBois, director of JRWA, and volunteer Bill Maurer of Falmouth, who has expertise in the engineering and construction fields. The judge relied on Mr. Maurer’s chronology of the “loss of offsite power” events that have occurred at Pilgrim since 1975. This showed that from September 1975 to February 2015 Pilgrim had 21 loss of offsite power events which forced Pilgrim into emergency SCRAM situations. The judge ruled “These weather related events demonstrate that Pilgrim is vulnerable to adverse weather conditions such as a nor’easter or blizzard.”

Even though the judge said the groups had legal standing to bring the appeal, he ruled that MassDEP properly applied the Chapter 91 law to grand the Tidelands License. This law includes a complex set of legal regulations that, in part, require MassDEP to locate the proper boundaries of the high and low water lines on the shoreline.

At the crux of the legal appeal was the method MassDEP used to determine where the high and low water marks are at Pilgrim. The citizen groups said the moorings were below the low water mark, meaning a stricter standard of regulation applied. Entergy and MassDEP said they were above the low water mark, in the intertidal zone or “private tidalands” and subject to looser regulations. The judge agreed with Entergy and MassDEP and based his decision on maps from 1866. The judge did not agree with the testimony of the citizen’s expert who said the 1866 map was outdated and the mooring system was in public tidelands.

Even though the citizens ultimately lost the appeal, the Decision is a major victory for advocates and local residents who want to use the law to protect their rights to the environment. By granting standing to JRWA and the twelve residents, the judge set a legal precedent that can be relied on in many types of lawsuits seeking to enforce environmental laws.

In another twist, at the time of the hearing in September 2014, local activist Bill Maurer discovered that Entergy had installed an end run around the Chapter 91 law. It installed an illegal, unlicensed mooring system in public tidelands, running from the jetty at Pilgrim to the shoreline. The pictures below show the illegal system. It appears Entergy did this to avoid penalty by the NRC in case the citizens won the legal appeal. If Entergy does not have a mooring system in place for the emergency cooling system, it will be in violation of the NRC Order from 2012. 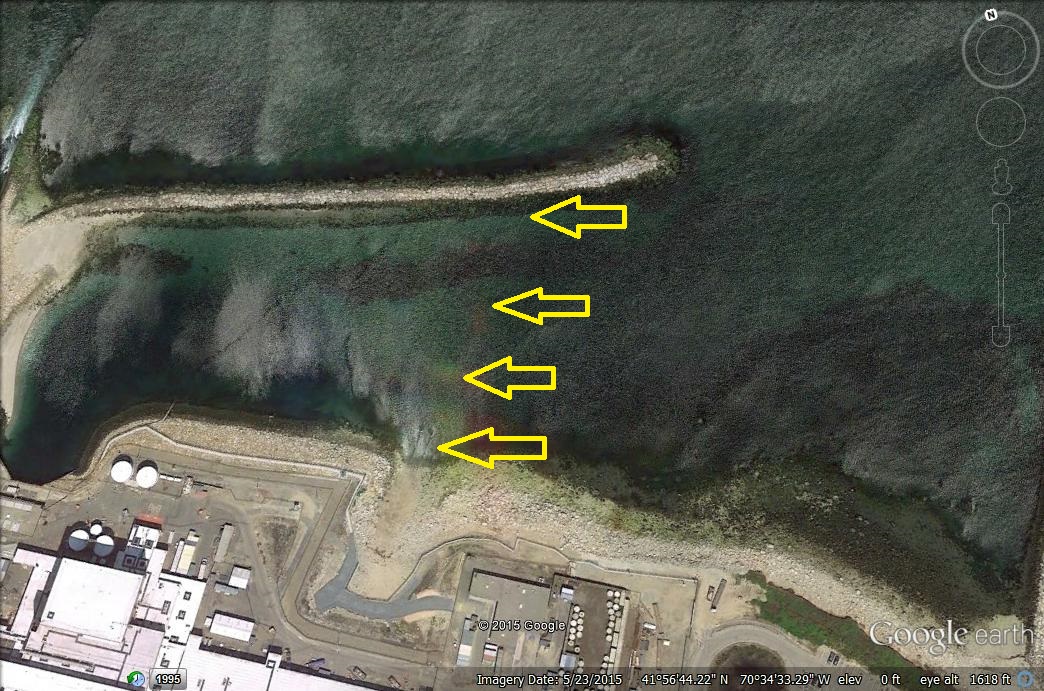 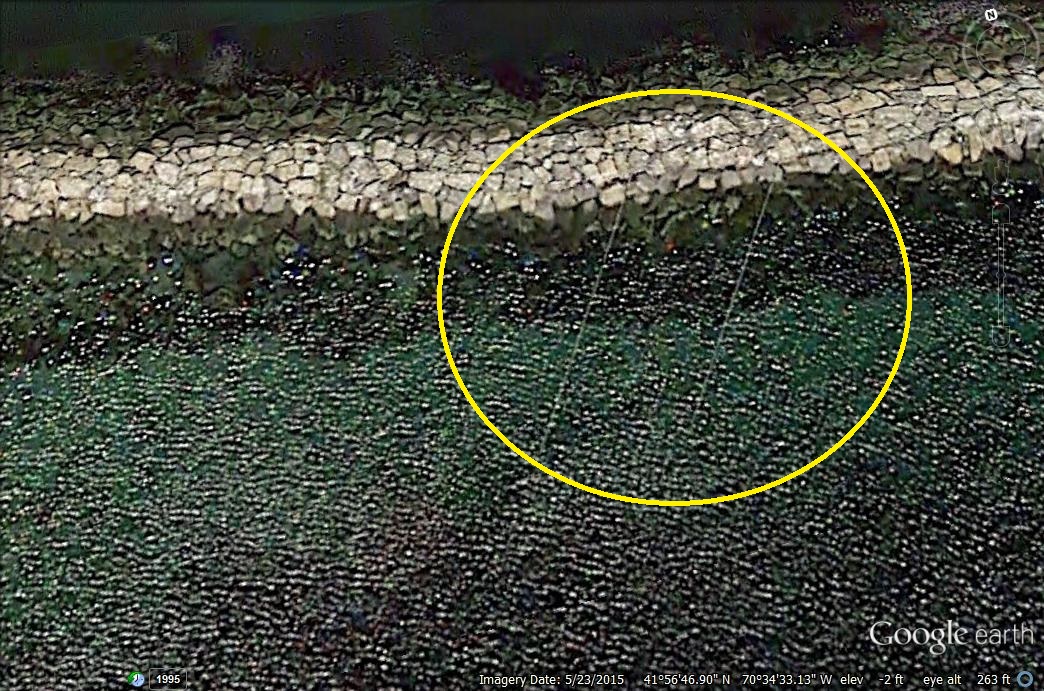 In September 2015 local residents asked MassDEP to enforce Chapter 91 laws against Entergy and require a new license for the illegal system. To date MassDEP has taken no action, and in February 2016 the group sent MassDEP a formal letter about the issue. There has been no response from MassDEP.

The twelve residents and JRWA were represented in the appeal by Meg Sheehan and Kevin Cassidy of Earthrise Law Center and Anne Bingham with support from Karen Vale. Bill Maurer, Pine duBois and Brett Sovick provided testimony and expert advice.