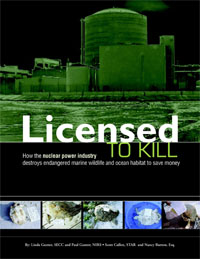 Licensed to Kill is an informative and compelling report detailing how once-through cooling operations like the one at Pilgrim Nuclear Power Station in Plymouth are irreversibly harming our marine life.

Licensed to Kill is a collaboration between Project Partners Safe Energy Communication Council (SECC), Nuclear Information and Resource Service (NIRS), Standing for Truth About Radiation (STAR) and the Humane Society of the United States (HSUS).

Marine life in all forms, from endangered manatees and sea turtles to essential microscopic organisms, is being harmed and killed by once-through cooling systems, used to remove waste heat at nuclear power stations. A typical once-through cooling system draws into each reactor unit more than a billion gallons of water a day, 500,000 gallons a minute. After cycling through the power generating station, the heated water is discharged at temperatures up to 25 degrees F hotter than the water into which it flows. A total of 59 out of the 103 U.S. reactor units rely on this system, either exclusively or in conjunction with closed cycle canals or cooling towers.

This report examines the toll the once-through cooling intake and discharge system takes on marine biodiversity around nuclear plants, including sea turtles and other endangered marine animals. The report takes into account the already severe problems affecting the health of U.S. oceans and waterways and the impacts of nuclear power plant operation within the context of this crisis. The authors review the cumulative impact of marine ecosystem destruction by coastal nuclear reactors as well as the local effect on marine life in the vicinity of the plant. Particular attention is given to the effectiveness of regulatory oversight and the adherence to and implementation of the federal Clean Water Act (CWA), the Endangered Species Act (ESA) and the Marine Mammal Protection Act (MMPA).