Watch this interactive video to see how power plants like Pilgrim that use once through cooling water kill fish and marine organisms. 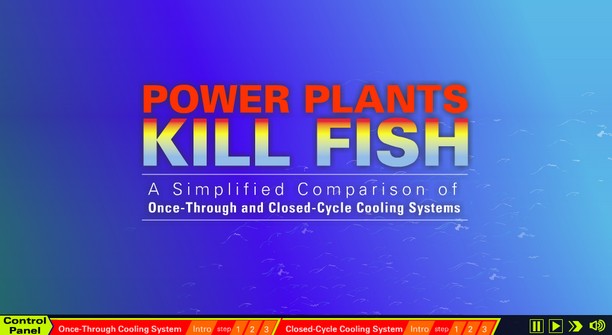 Video with more information at Gracelinks.org →

The Hudson Riverkeeper in New York has been trying to protect the river from Entergy’s massive water withdrawals there. The Riverkeeper’s Campaign to try to get closed loop cooling at Entergy’s Indian Point reactor station is highlighted here: The Entergy Files →

Here’s what Entergy had to say to its investors about its plan for protracted litigation with the Riverkeeper in order to keep killing fish and polluting the Hudson River: Executives Touch on Vermont Yankee, Indian Point as Entergy Reports Earnings →

“Leonard [Entergy CEO] also anticipated a long legal process for the license extension at the Indian Point plant in New York. Legal challenges to the plant’s operations are working their way through state water quality authorities, the Atomic Safety and Licensing Board and the Nuclear Regulatory Commission. Litigation before the state’s Department of Environmental Conservation began in October, and hearings before the ASLB are expected to begin in the third quarter of this year. If litigation drags on past the end of the original licenses in 2013 and 2015, Leonard emphasized the plant can continue to operate under NRC rules until the matter is resolved, which might be well into the license extension period the company is seeking in the first place.”

Ms. Sheehan has been a public interest lawyer since graduating from Boston College Law School in 1983. She is a Plymouth native and works on forest protection, land conservation, closing down Pilgrim, and a wide range of environmental, social justice, and conservation matters.