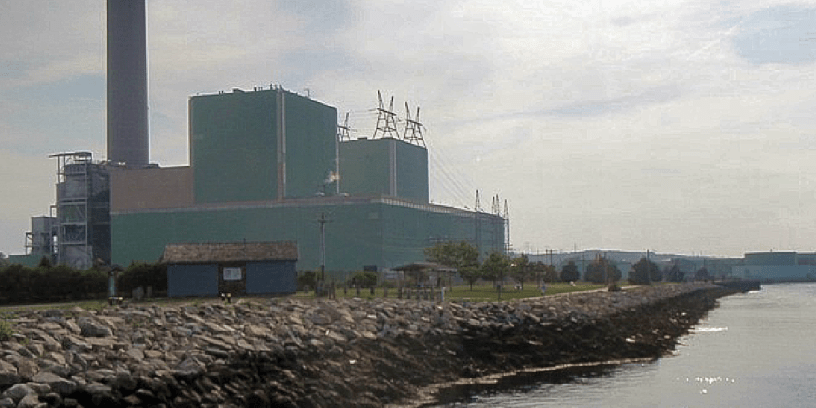 Canal Station is a gas and natural gas electrical power station located on the Cape Cod Canal in Sandwich, Massachusetts. Through a variety of mergers, it has been owned by a company called NRG since 2012. The facility stopped operating on a regular basis around 2009. It went totally dormant from 2009-2010 due to financial reasons. After 2010, it became a “peaker” plant, meaning it operated only during times of high electricity demand – e.g., heat waves, cold snaps.

Like Pilgrim Nuclear, Canal Station operates under a long-expired Clean Water Act NPDES permit (expired in 1994). This permit allows Canal Station to use and discharge process water into the Cape Cod Canal via a once-through cooling system. The facility’s once-through cooling system has the capacity to use up to 518 million gallons per day when operational. This type of outdated cooling system draws in seawater from the Cape Cod Canal, meaning it also draws in marine life. The process entrains small marine organisms (e.g., fish and shellfish eggs and larvae) through the system and impinges larger organisms on the intake screens (e.g., adult and young fish). It also discharges heated water into the Canal. See the thermal plume →

U.S. Environmental Protection Agency tried to make Canal Station install a closed-loop system in 2008, since it was the “Best Technology Available” to reduce entrainment and protect the environment. Then owner, Mirant, appealed. The final NPDES permit requiring closed-looped cooling was never issued and it operates in accordance with its original permit that was issued in 1989 and expired in 1994 (it has been administratively continued since that time). Read more about the NPDES permit proceedings →

NRG filed petitions with the state’s Energy Facilities Siting Board (EFSB) to construct a new electric power plant (Unit 3) and a solar array on the site.

We strongly believe that the EFSB should use NRG’s petition for Unit 3 as an opportunity to take Units 1 and 2 permanently offline. These outdated and environmentally harmful units should be decommissioned before Unit 3 is built. Given that Unit 3 is being proposed as a 40-year plant and it appears that NRG’s Air Quality Operating Permit for Units 1 and 2 expired on January 9, 2014, EFSB should offset the additional fossil fuel facility by taking the two obsolete units offline to eliminate water use and impacts to marine life. When operating, Units 1 and 2 have the capacity to use up to 518 million gallons per day through two cooling water intake structures and entrainment/impingement of marine organisms and pollutant discharges are issues. Furthermore, Unit 3 should be decommissioned at the end of its 40-year lifespan and no license extensions should be permitted.

We recently submitted comments to the EFSB on NRG’s petition to build Unit 3. Read our comments →

Here are some of the points outlined in the comments letter: