Pilgrim has been releasing radioactive materials and other contaminants deliberately and accidentally into groundwater, surface water, air, and soils since it began generating electricity in 1972.

Pilgrim routinely discharges thousands of gallons of radioactive effluent by eleven surface water outfalls directly into the surface waters of Cape Cod Bay. This is in addition to the half-billion gallons of seawater drawn in daily by Pilgrim’s cooling water intake structure, and the resulting thermal discharge.

From 2010 to 2012, Pilgrim discharged more than 478 billion gallons of diluted radioactive effluent (more than 465,000 gallons undiluted) through its surface water outfalls. In order to reduce the contamination levels to the NRC allowable limits, Entergy just dilutes the highly contaminated wastewater. Forty different discharges contained a total of over 7 curies of radioactive products.

In order to reduce the contamination levels to allowable limits, Entergy dilutes the contaminated wastewater. The 478 billion gallons that was discharged from 2010 to 2012 started out as more than 465,000 gallons of undiluted highly contaminated radioactive water. Entergy practices dilution by seawater as the solution to its radioactive waste pollution.

Hot water (aka “thermal pollution”) is regulated as a pollutant because it is a wide-spread and persistent problem that can have disastrous effects on local ecosystems and communities. Section 316 of the Clean Water Act addresses “thermal discharges.”

Baseline studies in the 70’s and 80’s showed that Pilgrim’s thermal plume would reach nearly five miles (3,000 acres; up to 1⁰C Δ) into the Bay, however findings are based on limited field data and current data are non-existent. The size and effects of the thermal plume could be larger or differ from what has been reported by the facility.

Marine ecosystems may be more sensitive to slight changes in temperature than terrestrial based ecosystems. This is because, for all marine species, only an optimal temperature range allows for successful reproduction and growth. Thermal pollution can negatively affect metabolic rates, feeding behavior, reproduction, and distribution of marine organisms. It also encourages parasites and invasive species.

View our “What is Thermal Pollution?” Fact Sheet →

Since 2007, Entergy’s own groundwater well tests have confirmed what many had long suspected: Pilgrim is leaking radionuclides, including tritium, and contaminating the soil and groundwater. Tritium – What’s Safe? Fact Sheet →

Normal background levels for tritium vary depending on soils, drainage, and some other factors, but are usually in the range of 5-25 picocuries per liter (pCi/L) for surface water and 6-13 piC/L for groundwater. When testing at Pilgrim began in 2007, levels as high as 3,300 piC/L were immediately found. Since that time, tritium levels have consistently been much higher than background levels ranging from annual highs of 70,599 piC/L in 2013 to 1,726 piC/L in 2009. 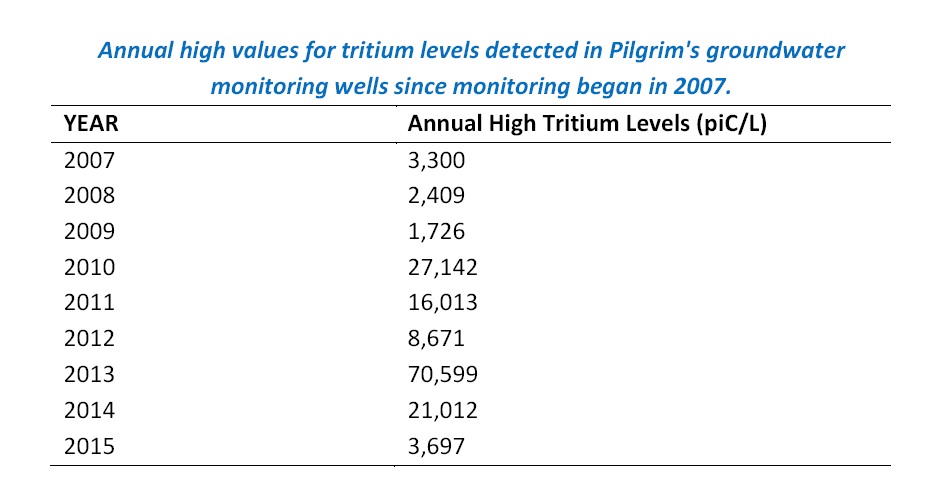 Extreme temperatures and storms, salt water and air, corrosive chemicals, and intense radiation have likely caused components to thin and crack, compromising the structural integrity of the facility and underground/buried pipes. State and federal agencies responsible for regulating Pilgrim have not indicated that Entergy will suffer any consequences whatsoever for the ongoing leaks.

Read a chronology of leaks at Pilgrim →

While tritium is the most common radionuclide released from nuclear power facilities, it is not the only radionuclide that is cause for concern. Tritium is considered an indicator contaminant. It is highly soluble in water and easily and rapidly flows with groundwater. Other radionuclides adsorb strongly to soils; therefore, tritium may be detected earlier than other contaminants and can be a good indication that other radionuclides are also leaking.

Soil test results in 2014, as part of a larger tritium leak investigation, showed high levels of manganese-54, cesium-137, and cobalt-60 in soils. Learn more about these other radionuclides found at Pilgrim →

Pilgrim’s on-site industrial wastewater treatment facility has also been a source of pollutants (e.g., nitrogen and chloride). This pollution causes is potentially polluting the groundwater and causing eutrophication in Cape Cod Bay. Read more about the issue →

With Pilgrim slated to close by June 2019, it is more important than ever to understand the extent of the environmental contamination at the site. Pilgrim needs to be cleaned up and decommissioned within a decade of closure, as opposed to being allowed to sit idle for decades or up to 60 years, a process commonly allowed by the Nuclear Regulatory Commission. Learn more about Pilgrim’s decommissioning and why contaminants need to be cleaned up quickly and fully →