Pilgrim’s nuclear waste, like that from other nuclear power plants around the U.S., was supposed to be sent to a deep geological repository offsite, funded by a fee imposed on electricity consumers. The proposed storage site, Yucca Mountain in Nevada, was defunded in 2010, and there is currently no other alternative.

The Department of Energy (DOE) is currently working to develop a solution to storage of nuclear fuel and high-level radioactive waste. It is developing a process to site facilities in collaboration with communities in the U.S., and in early 2016 sought comments from the public on this “consent based” process. However, there is no telling how long it will take, or it will even be successful.

For now, Entergy’s nuclear waste is stranded at Pilgrim and could be there for decades or hundred of years (or longer!).

Tons of nuclear waste is now being stored at Pilgrim – generated by over 40 years of making nuclear power. Most of the nuclear waste is stored in a dangerous “wet pool” (aka, spent fuel pool) inside the reactor building. Pilgrim’s spent fuel pool was originally designed to hold 880 fuel assemblies, but now holds approximately 3,000 – about 4x more than it was originally designed to hold.

Learn more about the dangers of pool storage →

Since it has run out of room in its wet pool, Entergy has built a long-term, dry cask nuclear waste storage facility on the shore of Cape Cod Bay. Eight casks have been filled to date.

What Happens After Shutdown?

In 2015, Entergy announced that Pilgrim would shut down no later than June 2019. Learn more about Pilgrim’s decommissioning →

If the long-term “SAFSTOR” decommissioning process is chosen and allowed by the Nuclear Regulatory Commission, Pilgrim would technically have the option to leave high-level nuclear waste in its overcrowded spent fuel pool for up to 60 years. However, Entergy probably won’t do this – it’s not financially beneficial. The pool will likely be emptied 5-10 years after closure. Even so, the option to leave the fuel in the pool for 60 years does exist, and it’s important to ensure that this does not happen. We will work to see that all high-level nuclear waste in Pilgrim’s wet pool be moved into dry cask storage as soon as possible.

The state recently established a Nuclear Decommissioning Citizens Advisory Panel (NDCAP) – A 21-member committee that will oversee pre- and post-decommissioning activities at Pilgrim. The purpose NDCAP will be to inform the Governor as well as members of the public. 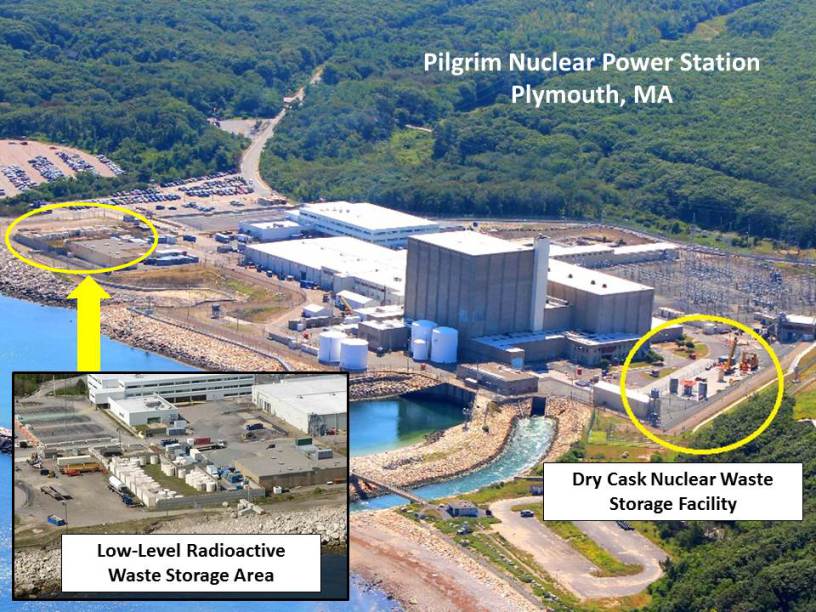 The 2015 photo above (courtesy of Paul Rifkin) shows Pilgrim’s dry cask project (circled, right) sited as close as 150 feet from the where the discharge canal meets the shoreline. The first 3 casks were filled and placed on the concrete pad in early 2015. As of May 2017, there are 8 casks on the pad. About 80-100 of these casks will be needed to hold all of Pilgrims 40+ years’ worth of nuclear waste. The white containers (left) are “low-level” radioactive waste storage containers, located only about 30 feet away from the coastal bank. At least one of these containers currently holds radioactive waste. We are also working to see that the nuclear waste storage areas are robust and properly sited farther away from the Cape Cod Bay shoreline.

In an Oct. 25, 2015 interview, Arnie Gunderson from Fairewinds said, “You build power plants near water because you have to cool them, and you build nuclear waste storage sites away from water” because of the threat of radioactive materials reaching it.

Even though Pilgrim will be shutting down in the near future, the nuclear waste is not going anywhere. Pilgrim’s nuclear waste storage areas are located too close to the shoreline and only about 4 feet above the Federal Emergency Management Agency’s (FEMA) flood level, and we suspect this number is overestimated.

According to NRC rules, Pilgrim’s nuclear waste may remain in Plymouth for decades, if not hundreds of years (or longer!). Both sites are currently sited within reach of rising sea levels, coastal storms, and saltwater degradation, creating a potential source of further contamination, long after Pilgrim shuts down. As climate change takes hold and sea level rise and other coastal hazards escalate, problems will be more prominent within a decade. Read more about our work on climate change issues →

We supported a citizen lawsuit since 2013, which sought public review of Entergy’s dry cask project under Plymouth’s zoning by-laws. The purpose is to see that the dry cask storage facility is properly sited and moved farther away from Cape Cod Bay, which was approved in 2014 with minimal review by the Town of Plymouth’s building inspector. The final Land Court trial took place in August 2016.

The Mass. Land Court issued its decision in April 2017 and unfortunately ruled in favor of Entergy Corporation. In learning about the court’s decision, one of the planitffs stated, “Pilgrim’s poor operating record and the risks this failing nuclear reactor poses has been a long-term concern. Making sure that the nuclear waste is properly stored and that local residents have every opportunity to have a say in the permitting process would help us protect our property values. The court’s decision denying us this opportunity is very disappointing.” Learn more about the decision →

If the Plaintiffs had prevailed, under local zoning laws the Town of Plymouth could have imposed conditions on Entergy’s special permit to ensure that the nuclear waste dump is properly sited, maintained and operated – including moving the dry cask storage facility to higher ground and further away from Cape Cod Bay. The town has now missed out on that opportunity.

The best option of course is for all of Pilgrim’s nuclear waste – both high-level and low-level – to be removed completely from the site to a scientifically-sound permanent repository. This, however, is a long way away. There is currently nowhere for Pilgrim’s nuclear waste to go. Pilgrim’s waste will be stored on the shore of Cape Cod Bay for an indefinite amount of time, which is why it is so important to ensure it is properly sited and secure until the day that a federal repository is finally chosen and developed. We will continue advocating for better flooding and seal level rise site assessments of the site.

[1] Beyea J. 2006. Report to the MA Attorney General on the potential consequences of a spent-fuel-pool fire at the Pilgrim or Vermont Yankee nuclear plant. Consulting in the Public Interest. 35 pp.